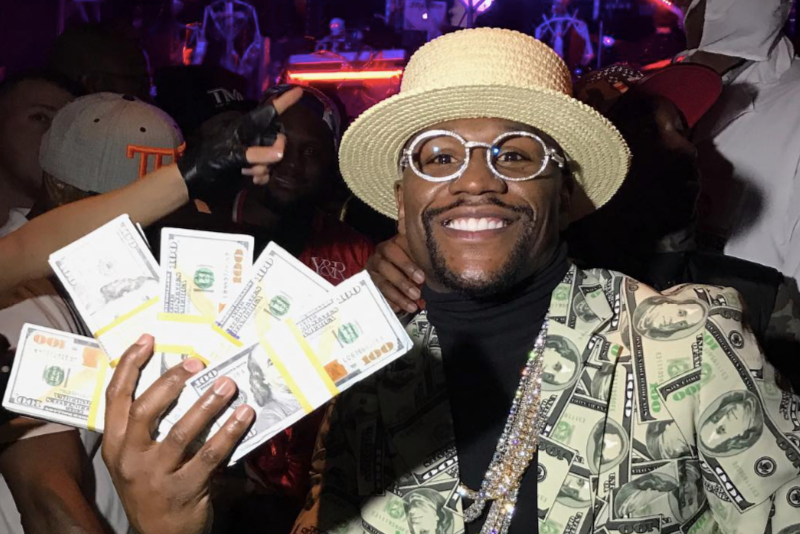 Is Floyd Mayweather broke? Is he living in a fool’s paradise, spending huge sums of money that he doesn’t have? Is Mayweather set to join the likes of Mike Tyson and Evander Holyfield, fighters who earned hundreds of millions of dollars yet ended up bankrupt?

This week, stories have again emerged that Mayweather lost $50 million in sports bets, depending on the source, either since 2017 or during 2017. Either way, it’s not a great look for the man who loves to post snapshots on twitter and Instagram of his winning betting tickets for hundreds of thousands of dollars, but as a rule never posts his losing stubs. Now it would seem that his losses far outweigh his wins, an ironic reversal of his boxing record, which thus far stands at 50-0.

This story first emerged last September, with an at-the-time explosive article on Maxim.com. It was followed soon after by Mayweather announcing he had purchased a $16 million “Billionaires watch” (even though he no-where near billionaire status) that resulted in major ridicule from ex-pal-turned-antagonist 50 cent which included the classic line:


“Man they found the 1 nig*a in the world, dumb enough to buy that watch!”

And then, as if Leonard Ellerbe had a had a word in Mayweather’s ear that his funds were on empty, he released a video of himself and Manny Pacquiao, announcing the two would fight in late 2018.

When Did Mayweather Last Compete In An Recognised Boxing Match?

41-year-old Mayweather last “boxed” in 2017, when he took on UFC superstar Connor McGregor who was making his boxing debut, in a financial blockbuster that proved to be the second biggest grossing boxing match in history, behind only Mayweather’s 2015 fight with Manny Pacquiao. Once again, depending on sources, Mayweather made between $200-$300 million for the fight against McGregor, which he won via a tenth round TKO, and after which he vowed never to box again.

He broke that promise on New Year’s Eve 2018 when he travelled to Tokyo to take part in a so-called exhibition match. Mayweather was paid a paltry (by his standards) $9 million to take on tiny 21-year-old kickboxer Tenshin Nasukawa. The 5’4”, 125 lb youngster, who had to abide by boxing rules and couldn’t use any of his kicking techniques, was flawed three times in the first round for an automatic TKO. Mayweather was roundly criticized for taking part in such a sordid event, and it was certainly a career lowpoint.

Where Has Mayweather’s Money Gone?

So why is Mayweather fighting for chump change? After all, here is a fighter who has been making big money for a long time. Surely he couldn’t be on the verge of blowing it all, could he?

Mayweather has been making eight figure paychecks ever since he won a highly controversial split decision over a 35-year old Oscar De La Hoya in 2007. Prior to that, he had still been making several million dollars per fight against the likes of Arturo Gatti, Zab Judah and Carlos Baldomir. However, after the De La Hoya victory, Mayweather became the fighter fans loved to hate – and wanted to see lose – which made him a huge box-office draw, and as a result, his asking price jumped to $20 million plus, a figure that would be boosted significantly by his cut of PPV revenue.

Of course, all that looked like so much loose change in comparison with the astronomical figure he earned by finally fighting Manny Pacquiao in 2015. Two years later, and he earned a similarly colossal paycheck against Connor McGregor. All told, Mayweather may have earned as much as $800 million in his lifetime thus far. If one minuses half of that for Uncle Sam, that still leaves $400 million.

But while it would seem like a vast sum of money to most sane people, in the hands of somebody of limited education and moderate intelligence who likes to spend as if he were a billionaire, that money will evaporate rapidly. Mayweather owns two executive jets, multiple mansions, a strip club in Las Vegas, and via Mayweather Promotions he puts on boxing cards and pays the purses for fighters under contract to him like Gervonta Davis and Badou Jack.

Mayweather frequently tells interviewers that he has no financial worries because he is a “smart businessman” and as he has made “smart investments” which bring him in “seven figures every month”, although that would seem to be little more than rehearsed soundbites. Mayweather is a boastful individual, and if he genuinely had investments that were netting him millions of dollars each month, he would surely be crowing about them. More likely his investments run no further than his property purchases, his fleet of multimillion dollar automobiles, and his strip club, Girl Collection.

The reality is, with the army of staff that he employs, in positions ranging from his own pilots permanently on standby to the hairdresser who he employs to shave his bald head, and everybody in between, chances are he is losing seven figures a month rather than making it. What’s worse is that due to Mayweather’s history of unsavoury behaviour which includes doing three months in prison for spousal abuse and making blatantly racist remarks toward Filipinos, Mayweather has no sponsorship deals.

Top golfers, footballers, tennis players and basketball players earn tens of millions of dollars annually well into their retirement years due to lucrative endorsement deals with blue-chip companies such as sporting-goods companies, watchmakers, and car manufacturers. However, Mayweather has none of these, so when he is not fighting, there’s lots of money going out, but zero coming in.

All this would be bad enough, and surely lead to eventual financial disaster, but if the stories about his huge gambling losses are true, his financial demise will be accelerated significantly. If he did indeed lose $50 million in 2017, how much did he lose in 2018? And what about his famed in ability to pay his tax bills? When he fought McGregor, he owed $30 million in taxes. How much does he owe this time?

Worse still, if he does fight Manny Pacquiao in a rematch in 2019, based off his last two displays compared to Pacquiao’s last two fights – a KO win over Lucas Matthysse and a one-sided decision over Adrien Broner – Mayweather will surely lose the only thing that keeps him relevant – his precious “O.” Should that happen, expect Mayweather to carry on fighting – and losing – for years to come.