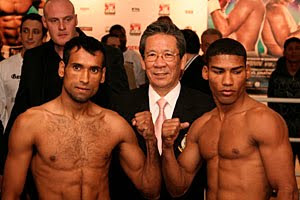 The force of nature that is WBA featherweight champion Yuriorkis Gamboa returns to the country that gave him his berth in professional boxing this Saturday night when he defends his title against undefeated Argentinian Jonathan Victor Barros at the Alsterdorf Sporthalle in Hamburg, Germany.

In a world awash with hyperbole, tempering adjectives when discussing Gamboa is tough. Quite simply, he is the most exciting fighter competing today. Pound for pound, no other fighter, not Manny Pacquiao, not Edwin Valero nor Kelly Pavlik has Gamboa´s trip-hammer punching power.
The reason Mike Tyson remains the biggest money earner boxing has ever seen was initially a combination of Tyson´s physical appearance – the short powerful frame, the focused malevolence, and the fact that when he hit someone they would start break-dancing. The intrigue and scandal came later. Although just 5´5 ½´´, Yuriorkis Gamboa (17-0, 15 ko´s) has that same physical presence as Tyson, and that same one-punch lights-out power.

Allied to that power are smooth boxing skills attained by 250 amateur bouts when Gamboa was one of the Cuban national team´s superstars. He won gold in the flyweight class at the 2004 Athens Olympics, and would have been a hot favorite to repeat that success at a higher weight class in Beijing. However, Gamboa has gone on record as saying at this time he was so poor, he sold his Olympic gold medal to support his family.

In December 2006, Gamboa, current heavyweight sensation Odlanier Solis and Yan Barthelemy, all gold medal winners in Athens, defected from the Cuban national team when training in Venezuela. From there, they made their way to Miami. Unable to attain work permits in the States for six months, the trio signed professional contracts with German based ARENA Box-promotion, and began their punch-for-pay career´s in Germany. Debuting in April 2007, Gamboa boxed six times in six months in Germany.
His progress has been lightning fast. Within ten months of turning pro he was ranked in the world´s top five super-featherweights by the WBA. Dropping down to featherweight, Gamboa proceeded to beat up any contender brave enough to share a ring with him. In April 2009, a tenth round TKO over tough Venezuelan Jose Rojas gave Gamboa the WBA´s interim featherweight title, guaranteeing him a world title shot. The Cuban had to wait six months for his chance – the longest he had spent out of the ring since turning pro. When it came – against Panamanian Whyber Garcia, Gamboa didn’t waste it, TKO´ing Garcia in four rounds.
In January of this year Gamboa dispatched tough Philadelphia based Tanzanian Rogers Mtagwa in two brutal rounds. This is the very same Mtagwa who gave WBO featherweight champion Juan Manuel Lopez the fight of his life last October, only losing a majority decision.

Although 28, the baby faced Cuban looks ten years younger. The dream fights at featherweight are unification matches with IBF title holder Indonesian Chris John, and WBO champion, Mexican hot-shot Juan Manuel Lopez. If he chooses to remain at featherweight and rack up the defenses, he can become a modern great. But fight fans will hope Gamboa eventually chooses to climb the divisions, a la Manny Pacquiao.

26 year old Jonathan Victor Barros (28-0, 16 ko´s) is in his 6th year as a pro. This will be his first fight outside of South America. He is the reigning WBO Latino featherweight champion, and is ranked 7th by the WBA and 5th by the WBO.
Not a lot is known about Barros, and Carl Moretti of Top Rank, Bob Arum´s promotional company that handles both Gamboa and Juan Manuel Lopez said;
”We don’t know a lot about him, but any time you fight a fighter from Argentina, you’ll probably get a crude guy with a decent chin who is a wild puncher, so there is always some danger.”
On Gamboa fighting in Germany again, Moretti said;
”I am very proud to bring him back to where his pro career started three years ago. When Gamboa will be back in Hamburg it will feel like a circle is complete. I know that he (Gamboa) has lots of friends here and is happy to return to Germany.”

It would seem that Barros´only hope is if Gamboa´s eye is not on the ball, so to speak. If he is dreaming of a potential mega fight with Lopez in the summer, the ”wild swinging Argentinian” might be able to capitalize on it.
It´s been my experience that Argentinian boxers haven’t been ”wild swinging” since the days of Luis Angel Firpo. Moretti, Arum and indeed Gamboa should beware; Carlos Monzon was an Argentinian who know one had heard of, and he didn’t do too badly.

But Yuriorkis Gamboa has been through too much in his short life to be anything less than focused on the job at hand.
Gamboa via a TKO inside five rounds.