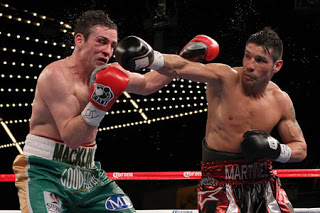 It is a bit funny or slightly amusing how after a long time observing fighters at close range, in frozen frames or between rounds, one may distinguish facial tweaks or body signals, writes  Al Hernandez-Santana
While sitting on his stool waiting for the bell, if Sergio “Maravilla” Martinez winks out of his right eye to the camera or one of his corner men, watch out!  It means a knockout is coming soon.  To me it’s clear that it means Sergio feels in control of the fight, that he is taking his second breath and recharging, to explode in powerful shots and combinations during the next round.  When Miguel Cotto puckers his lips and exhales heavily with hissing sounds, you can bet that he’s throwing and connecting thudding blows to the face or rib cage of his opponent.

Therefore one telling sign for the upcoming fight between Floyd Mayweather and Cotto, is to watch Miguel’s expression and see how many times he makes that face. Not many boxing experts are giving Cotto a decent chance of winning.  Granted, Mayweather is a masterful defender and it is true that once inside the ring, his opponents are befuddled by his elusiveness and slick body movements that make him very hard to hit, at least not without paying a price.  Mayweather is the odds favorite for this fight. This in spite of his problems outside the ring and a jail sentence waiting for him after the fight– nothing ever seems to distract the man during training. And he still is, by all accounts, a young 35-year-old. These are all problems for Miguel. Mayweather, like Pacquio, can also take a good shot and absorb punches from bigger men. Those who always doubted their ability to go up in weight were badly mistaken.

A better match up for Cotto would have been to fight Saul “Canelo” Alvarez, whose managers smartly agreed to fight an aging Shane Mosley in the Cotto-Mayweather undercard. Canelo is a young, exciting boxer with natural abilities, but he lacks experience and has not been tested at such an elite level. Such a match is a big draw and would have attracted a lot of pay-per-view revenue from Mexican and Puerto Rican fans. However, from a money purse and Cotto’s camp perspective, I could see why they took the fight–a Mayweather fight is big money. The only advantage going for Cotto is that the fight was made at the 154-pound limit. Nevertheless, Mayweather fought at that weight against De La Hoya and handled it very well.

The key to Cotto’s victory will be to attack the body for several rounds and use his left kook, something he has inexplicably stopped doing after revamping his boxing skills and ring movement under Emmanuel Stewart and others. The body presents a bigger target and hopefully will slow down Mayweather some. The only caveat to this strategy, will Cotto display good enough footwork to get in the right position to deliver that punch with force?  And perhaps a more interesting question is whether he will switch to southpaw for stretches of time, like he’s done with some effectiveness in previous fights.

This will never be a fight where one punch decides the outcome, Floyd Mayweather Jr. is too good for that. Miguel Cotto will have to rely on some measure of good luck to catch Mayweather clean or when he’s not looking. I believe that it is possible.