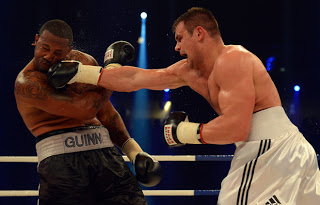 I wrote an article several years ago entitled “Introducing Denis Boytsov.”
In it I waxed lyrical about a young heavyweight who I believed at the time to be the future of the division.

Shortish for a modern heavyweight at 6´1´´, the powerfully built German based Russian who was then in his early twenties fought in a style that was reminiscent of Mike Tyson: fighting aggressively out of a crouch, applying constant pressure and throwing fast combinations with KO power in both hands.

He looked hungry and dangerous – a real threat to the top dogs of the division. I figured Boytsov was a shoe-in to win a version of the heavyweight crown within the next 2-3 years.

Fast forward to last weekend. Boytsov fought on the undercard of the Manny Charr vs Oleksiy Mazikin fight in Hessen, Germany. In a scheduled eight rounder, Boytsov KO´d ten bout veteran Oleksandr Nestrenko in three rounds. Footage of this fight can be seen here. Although Boytsov still displayed good hand-speed and decent power, he looked overly cautious and tentative. His stance was more upright than it once was, and he looked far from impressive against a raw novice. Tyson Fury Nestrenko is not!

27 year old Boytsov is 33-0 with 26 KOs, but in a nine year career he has still not faced a ranked contender. The standout name on his record remains Dominick Guinn, the once highly touted American who in his prime outpointed a once-beaten Audley Harrison and KO´d Michael Grant in one round. However, the Guinn who faced Boytsov in 2012 was 37 years old with a 33-8-1 record and way past his prime. Boytsov won a shutout ten-round decision.

Boytsov has boxed just ten times in the last five years – that´s just ten fights from the age of 22 to the age of 27. He has held no worthwhile title, nor has he boxed in any eliminators.Virtually every opponent he has fought has been a “marking time fight.” He actually looks to have regressed from the exciting, explosive fighter he was in his early twenties. Sure, he has missed a few months here and there with the occasional injury, but which fighter hasn’t?

Clearly Boytsov´s management are waiting until one of the Klitschko brothers either loses or retires. If they believe that their charge is just too small to be a threat to the Ukranian giants, fair enough, but why not match Boytsov with quality fighters of comparable size – Steve Cunningham, Tomasz Adamek, even an Albert Sosnowski? Not long ago, I would have taken Boytsov to defeat the likes of Chris Arreola, Kevin Johnson and Derek Chisora – but not anymore. When scanning the list of today’s contenders, it is difficult to pick an opponent Boytsov would be guaranteed to beat. Amazingly, there was talk earlier this year of a fight vs the aforementioned Fury, but no sooner was the bout apparently on than the Russian´s camp had called it off, claiming their fighter did not have enough time to prepare… whatever that means.

Boytsov was once ranked in the top-5 by every boxing organization. Now only the WBA and WBO afford him this over-inflated luxury. Respected boxing websites Fightnews and Boxrec don’t have Boytsov in their top 15 heavyweights.  At 27, he should be entering his peak years and establishing himself as a genuine contender. However, the reality is that Denis Boytsov is very much yesterday´s man, and looks far off the pace of the current heavyweight division. If he were named as David Haye´s next opponent, we would fear for his well-being.

Are there still the flames of what appeared to be a sensational fighter burning somewhere deep in Boytsov´s soul? Does he still have the desire to wreak havoc among the sport´s big men? Is he as scared of tough opposition as his management clearly is?

Denis Boytsov needs to take control of his own affairs and rediscover his passion for boxing before the sport – and in particular the heavyweight division- loses one of its brightest and most exciting talents.