Home Archive Why Floyd Mayweather – Unlike Ali, Robinson And Leonard – Will... 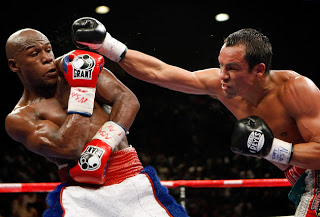 Floyd Mayweather Jr: what descriptive words does that name conjure up to you? Controversial? Great? Undefeated? Obnoxious?
Lets face it, the amount of words used to describe Mayweather over the years is both large and varied, positive and negative. However, one word that is rarely if ever used to describe the undefeated five weight world champion is ´´warrior“, which is surprising considering the man is a professional fighter, and one would think that the term ´´warrior“ would go hand-in-hand when describing such an individual. And yet, when it comes to Floyd, it´s not.

The Oxford online dictionary describes a warrior as a ´´brave or experienced soldier or fighter.“ Floyd Mayweather is undoubtedly brave, as he climbs into the ring and fights other men for money. So, therefore, theoretically, he must be a warrior.

But is Mayweather really that brave? Sure, he climbs into the ring – a fairly safe environment compared to a lot of places – Baghdad, Mexico City, Johannesburg or the wrong neighborhood in any city in the world. I have boxed as an amateur, and it took a degree of courage to climb in the ring and compete, as it did to spar with the pros in the gym. But at any given time, if I had taken a beating, someone of authority was always there to step in and save me from serious injury.

One cannot compare the bravery needed to climb into a boxing ring with that of a soldier walking into a combat zone, for example.

Once inside the ring, Mayweather´s no.1 objective is always the same – to not get hit. The definition of ´´brave“ is to be ´´ready to face and endure danger or pain.“ Sure Mayweather faces danger every time he gets in the ring, but endures pain? Can anyone remember the last time they saw Mayweather hurt – in boxing terms that is – in the ring? 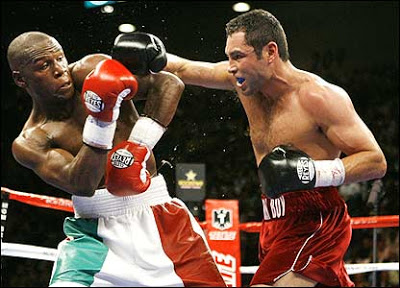 Mayweather is no coward, but he is not brave by boxing standards. And we are not suggesting that the only brave fighters are the Mickey Wards, Arturo Gattis and Michael Katsidis´s of this world. Master boxers like Sugar Ray Robinson and Sugar Ray Leonard were as brave as they come. They were always willing to take risks to obtain a knockout, even though they both possessed far more pure boxing skills than any rival they faced in the ring. No fighter in history was braver than Muhammad Ali, a man blessed with reflexes and speed unseen in a heavyweight before his reign or since. And yet his need to entertain saw him absorb tremendous punishment in the second phase of his career when his reflexes were not quite what they were. 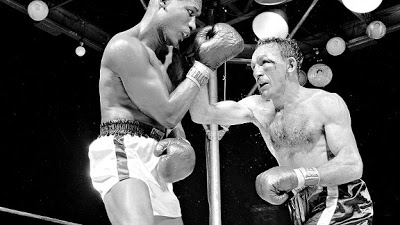 Mayweather has often referred to himself as the greatest fighter of all time, and he has his believers, but many fans, scribes and experts believe that greatness is not just defined by talent and titles won, it is also attributed to coming back and grabbing victory from the jaws of defeat. Mayweather´s fans may argue that no opponent has ever been able to force him into the trenches, but the counter argument is that he has consistently avoided fighters that could truly test him, and time-and-again gone for the safest option (a points win) in the ring.

As a junior lightweight, Mayweather was not just supremely talented and extremely fast, he was also relatively large and powerful, factors that saw him score the greatest number of stoppage wins in his career. Even then, despite fighting more aggressively  he was rarely tagged and never with any serious force. As he climbed the weights in search of bigger paydays, he lost any physical advantages he may have had, and began relying more and more on his defensive skills. As a result, his fights became duller, and to compensate, Mayweather created his current ´´gangster“ persona, cleverly designed to antagonize one section of the public, while attracting another. As a result, Mayweather´s fights are big business, yet rarely exciting affairs. Mayweather has scored precisely one knockout win in his seven years in the welterweight division  and that was over junior welterweight Ricky Hatton (obviously no one counts his blindsiding of Victor Ortiz.) 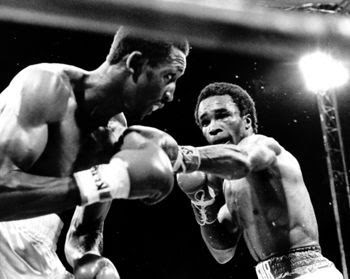 Could he have scored more KOs if he had forced the action and taken a few risks? Possibly. He certainly had his opportunities in fights with Zab Judah, Juan Manuel Marquez, Mosley and Cotto, but never looked like he was willing to risk taking a punch in order to deliver what all fight fans ultimately crave – an exciting KO.

Does Mayweather take a great punch? Who knows? He´s never really been hit consistently in a bout for us to form any kind of opinion. Sure, he was caught once in the second round by Shane Mosley in 2011, but Sugar Shane was so overcome with adrenaline after his brief success, he didn’t land another decent punch  in the remaining ten rounds. Miguel Cotto got through consistently in his fight with Mayweather last year, even bloodying his nose, but while the Puerto Rican had his successes, there was very little power in his punches.

Can Mayweather dig deep when the going gets tough, like Robinson did in fights with the likes of Jake LaMotta, Randy Turpin and Carmen Basilio, Leonard did against Roberto Duran, Tommy Hearns and Marvin Hagler, and Ali did in his wars with Joe Frazier, Ken Norton, George Foreman, Earnie Shavers and Leon Spinks? We simply don’t know, because he´s never really had to. The fighters that could have been his great rivals during his career like Cotto, Mosley, Paul Williams, Antonio Margarito and Manny Pacquiao, Mayweather either avoided until they were safely past their sell-by date, or simply avoided – period.

This lack of any genuine rivalry in Mayweather’s career has resulted in a lack of classic, memorable fights. Every truly great fighter in boxing history has earned their ”greatness” by being victorious in exciting encounters with their toughest rivals. Mayweather’s closest, hardest fights thus far in his career where his first fight with Jose Luis Castillo in 2002, his points win over Zab Judah in 2006 and his split decision over Oscar De La Hoya in 2007, all close, competitive fights, but hardly in the league of Ali Frazier III, Robinson Basilio I or Leonard Duran I. 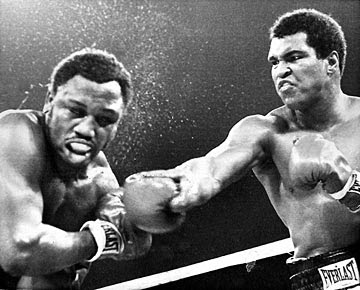 It is conceivable that Robinson, Leonard and Ali could have fought the exact same way that Mayweather does if they had wanted to. They could probably have gone through their careers unbeaten if they had focused on avoiding punishment and scoring points. But that was never going to happen, because it was simply never in their collective D.N.A. You see all three may have been quite possibly the finest boxers the world has seen, but they were also fighting men. They wanted to take risks, test an opponents power, go for that exciting KO win and entertain their fans.

Quite simply, they were warriors!