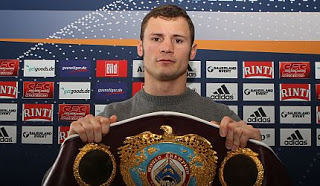 WBO super middleweight champion Robert Stieglitz is in action this Saturday night when he takes on Mexico’s Enrique Ornelas at the Freiberger Arena in Dresden, Germany.
It will be 29 year old Stieglitz’s third defence of the title he won on a 9th round TKO over Karoly Balzsay in August 2008. Ornelas’s main claim to fame is taking the legendary Bernard Hopkins the distance last year.

Both Stieglitz and Ornelas are well aware that a lucrative fight against the winner of the Super Six World Boxing Classic awaits the holder of the WBO title. Tournament favorite, current WBA champion Andre Ward of the US has stated that he wants all of the belts, including those of Stieglitz and the IBF title held by Canadian based Romanian Lucian Bute. Interestingly, Britain’s Carl Froch is currently ranked 2nd by the WBO. If Froch were to lose next month’s Super Six matchup against Arthur Abraham, Mick Hennessy, Froch’s manager, may view the WBO crown as the perfect way of getting his charge straight back on top. 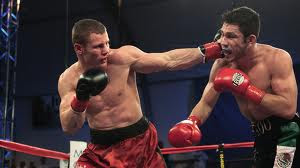 A pivotal career rehabilitation point for the German was his points win over highly regarded Pole Lukas Wilaschek for the WBC International title in December 2008. That result elevated Stieglitz to no.5 in the WBC world rankings. Two tune up fights later, and Stieglitz challenged the then undefeated Hamburg based Hungarian Karoly Balzsay for his WBO world super-middleweight crown in Budapest. Stieglitz put on the performance of his career that night, dominating the defending champion in front of his home fans, and winning the WBO title when Balzsay´s corner pulled him out after ten one sided rounds.

Style wise, Stieglitz is an entertaining combination of technically skilled boxer and back street brawler. He seems to like nothing more than to get into a war with his opponent, even when his is winning comfortably. In that way he is similar in style to Britain’s own Ryan Rhodes. Like Rhodes, Stieglitz is more than capable of boxing on the outside and piling up points, but he just can’t resist getting stuck in, which makes the German a great fighter to watch. It is a view echoed by the fights promoter, Ulf Steinforth, who said; ”Robert Stieglitz is the boxer who delivers the most attractive fights in Germany these days. This will be an exciting and worth seeing.”

Stieglitz’s throws a lot of punches with a high level of accuracy. Unfortunately for him, although 23 of his 38 wins have come inside the distance, he is no knockout artist. He stops opponents with the sheer volume and accuracy of his punches, rather than any one-punch power.

His two defeats – the TKO loss to Andrade and a shock third round TKO to former victim Alejandro Berrio were both down to Stieglitz electing to brawl rather than box.

The Andrade fight was an IBF title eliminator in California. Stieglitz, clearly wanting to impress the American audience, went toe to toe with the tough Mexican from the opening bell. It made for a tremendous spectacle, but Stieglitz was always going to come unstuck by using tactics that played right into Andrade´s hands. Andrade is no Floyd Mayweather, but he is big and tough and excels in trench warfare. When the referee pulled Stieglitz out of the fight midway through the eighth round, his decision was based more on the accumulation of shots Stieglitz had taken during the fight rather than any one blow.

The loss to Berrio was a different matter altogether. Stieglitz had stopped the dangerous Colombian in the 11th round in 2005. The rematch in 2007 was for the vacant IBF super-middleweight title. Stieglitz tore into Berrio from the opening bell, and fought as if convinced he could end the bout much earlier this time. Berrio, like his fellow countrymen Breidis Prescott and Edison Miranda, is a murderous puncher. Halfway through the third round, Berrio sent Stieglitz literally bouncing off the canvas with a picture-perfect right to the side of the head. Stieglitz got straight up, and seemed to be okay. Seconds later, the Colombian repeated the trick. This time when Stieglitz got to his feet it was clear he was far from okay. A quick volley of blows by Berrio and it was all over. The Colombian went on to lose the IBF crown in his first defense to the current champion Lucian Bute.

Can 30 year old Enrique Ornelas (30-6, 23 ko’s), the WBO 9th ranked contender, draw hope from the performances of Andrade and Berrio and pull off an upset of his own on Saturday? He was certainly entertaining during this weeks pre-fight press conference when he made a big show of publicly tearing up the fight’s poster that only featured Stieglitz!

Ornelas said; ”I’m ready for this fight. I’m happy about the world championship chance. It’s my job to win this fight. I have only one goal and that’s to take the belt away from Robert Stieglitz.”

The Mexican has been based in the United States throughout his career, and Saturday’s fight will be his first outside the USA. A pro since 1999, Ornelas went unbeaten in his first 19 fights before suffering a 9th round TKO against the once promising Californian Christian Cruz in September 2004. He continued to box with mixed results until he scored his breakthrough win; a fifth round retirement over the veteran American Bronco McKart, a former WBO light middleweight title holder, in December 2007.

In October 2008 Orlenas was outpointed by compatriot Marco Antonio Rubio in a WBC middleweight title final eliminator. Rubio went on to lose to then champion Kelly Pavlik in nine rounds the following year.

Last December Ornelas boxed the great Bernard Hopkins in a tune up for the American ahead of his clash with fellow ring legend Roy Jones Jr. Ornelas was dominated by the cagey Philadelphian, fighting in front of his home fans, and although he lasted the distance, Ornelas won just two rounds on the combined cards of the three judges.

Can Ornelas do any better against Stieglitz? He will certainly find the German a less elusive target than defensive maestro Hopkins, and the Mexican, with 20 KO’s in his thirty victories can punch. Although the German is durable, he can ‘go’ if tagged, as shown in his loss against Berrio.

This could well turn out to be a very entertaining fight. Look for some tremendous exchanges early on, with Stieglitz possibly finding himself in trouble. By the second half of the fight, the German will be in command and dictating the pace, and Ornelas will be forced to go into survival mode.

Stieglitz will continue to press and go on to score either a late TKO or a unanimous points decision.