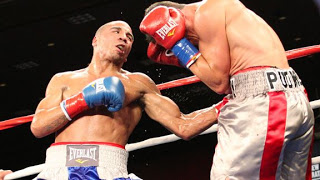 Andre Ward served notice to Arthur Abraham,  Carl Froch and the rest of the Showtime Super Six contenders, delivering a master class of boxing to take Mikkel Kessler´s WBA super-middleweight crown on a unanimous  11 rounds technical decision last night before 10,000 ecstatic fans at the in Oracle Arena in Oakland, California.
Before the fight, Kessler had been many experts pick to win the tournament. Ward however, tore up the form guide by baffling Kessler with aggressive switch hitting. Kessler´s straight up European style had stood him in good stead through 42 victories (32 ko´s) with just one loss to Joe Calzaghe, but he was made to look pedestrian by the slick punching Oakland resident.
The pair clashed heads in the eight, opening a cut over Kessler’s eye. A second clash of heads in the eleventh gave the referee no choice than to take it to the scorecards.  By this time Ward was a mile ahead on points, leading 97-93 on one card and 98-92 on the other two.  Only a kayo would have saved Kessler´s crown.  The Dane has the power to flatten any man he catches properly, but Ward´s chin had been an elusive target all night, and even when tagged, it hadn’t been found wanting.
Andre Ward looked the complete package, and on last evidence, he has the ability and personality to become a superstar in the game. His respect for his opponent both before and after the contest was a refreshing change from the tiresome ´´smack talk“ pedaled by the likes of Floyd Mayweaher.
In this writers opinion, Ward should have too much for Nottingham’s Carl Froch, who is a far less skilled operator than Kessler. Andre Dirrell is a poor man´s Andre Ward. He could be tricky, but Ward should get by him. His next fight in the series is scheduled against Jermain Taylor, but there is a consensus in the boxing world that Taylor will pull out of the tournament following his devastating knockout loss to Arthur Abraham in Berlin lat month.
Which brings us nicely around to ´´The King.“ At this point in time, brilliant as Andre Ward was last night, Abraham would be strongly fancied to beat him.  The former IBF middleweight champion is on the top of his game right now, and looks unstoppable. But if Ward can get another good win or two under his belt, a clash with the Armenian Iron man could be very interesting indeed.  Right now, Ward is my second favorite for the Showtime Super Six crown behind Abraham, with Kessler third, Froch fourth, then Dirrell and finally Jermaine Taylor, who really should pull out of the tournament and drop back down to middleweight.
Post fight comments;
“I feel like it was my time,” Ward said. “I was not intimidated by Kessler’s record. I was a little surprised they stopped it when they did. I would have liked to have seen what would have happened.
“Some fighters are feared. I think I’m the most underestimated fighter in the game.”
“He threw a lot of elbows and head butts but never got any warning,” Kessler said. “He got me out of my rhythm … he was punching during the holder. He comes in with his head, he knows I’m not moving.”