Home Archive To Slay a Dragon 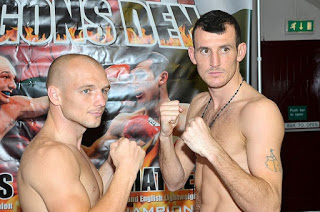 For an age where chivalry is supposedly dead, it certainly takes a degree of bravery to attempt what Derry Mathews will on October 1st at the Newport Leisure Centre in Wales. After suffering four stoppage defeats in five fights between 2008-9, the bright light of Mathews’ once promising career – unbeaten in his first twenty fights – looked all but extinguished. Now on the momentum of a four fight winning streak, with two losses avenged, a fresh approach and a new coach in his corner, Mathews has managed to claw his way back onto the boxing radar. While arguably Mathews’ former opponents are not of Gavin Rees’ calibre, it is possible that the momentum of the comeback and Mathews’ overall rejuvenation could trouble Rees as the fight progresses, as he has appeared to tire in the later rounds of his most recent fights.

While Mathews’ punch resistance remains something of an unknown going into this fight (all five of his losses came by way of stoppage), he has proven himself to have considerable psychological resilience, having been so publicly written off by fans and pundits alike. A highly capable boxer with grit, resolve, and a strong right hand when he throws it, if Rees loses focus or stamina beyond the mid rounds and gives Mathews the space to impose himself, Mathews is considered by some to carry a genuine chance of an upset. At the press conference in September, Mathews himself enthused, “It’s a big opportunity for me. As Eddie [Hearn] said, Gavin’s been talking about fighting for a world title. When I win the European title on Saturday, I want to belong up there too. Maybe I can get that crack.”

Fight fans will know it is one thing to breathe a verbal fire, but the dragon to be slain comes in the form of former WBA light-welterweight champion, Gavin Rees. An aggressive, come-forward fighter whose single career loss came against a staunch Andriy Kotelnyk in 2008. Rees has a solid workrate and high pressure fighting style that can smother all but the most active of opponents. JaneCouchBoxing.com provides a candid encounter with Rees in which Jane Couch asks the fighter what he makes of the fact that Derry Mathews will be bringing down the ‘Scouse Army’ for support.

Clearly comfortable in his role as favourite, Rees shrugs his shoulders, responding, “He can bring whoever he wants. He’s getting in the ring with me.”

The consensus concern for underdog Mathews appears to be whether or not he can weather the storm of Rees’ early pressure and take the fight into the later rounds; even then, questions surround whether he has the volume and high workrate to control the pace of the fight from thereon in. What might the game plan be beyond the tactics of merely surviving Rees’ early onslaughts? Will fresh addition Oliver Harrison have tightened Mathews’ defence enough to frustrate Rees’ efforts? Perhaps he will have introduced or improved some of the angles and lateral movement that could disrupt Rees’ rhythm and ability to cut off a ring?

All are valid questions, but can only truly be answered by what takes place in the ring.

With a particularly strong start to the domestic season, Tait-Symonds and Sykes-Buckland perhaps being two notable examples, Rees and Mathews are in good company. Both fighters have every opportunity to give gallant accounts of themselves on the night, and ensure that whether as joyous victor or brave and fallen, each can proudly bare his battle scars.