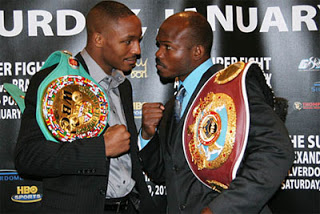 An interested spectator of Saturday’s fight will be Britain’s WBA light welterweight champion Amir Khan, fresh off a points win over Argentine hard-man Marcos Rene Maidana in a titanic struggle in Las Vegas last December. After proving his worth against the division’s hardest puncher, Khan would start as the bookies favorite in a bout with either Bradley or Alexander.

27 year old Californian Timothy Bradley (26-0, 11 ko’s) remains best known to UK fight fans as the man who seemingly came from nowhere to take Junior Witter’s WBC light welterweight title in Nottingham three years ago. Witter had been a powerful, dominant figure in the 142 lb class for the previous seven years, unbeaten since a points loss in a 2000 title shot against a peak Zab Judah, and avoided by the divisions top names.

When the 24 year old, baby faced Bradley arrived in Britain armed with nothing more than an unbeaten record and his WBC World Youth title, fans and experts alike were convinced the American would be brushed aside emphatically. How wrong we all were.

Bradley may be baby-faced, but he has pure steel running through his veins, and was too much for a weight drained Witter, flooring the champion in the sixth round and outworking him in the second half of the bout to win a split but deserved decision.

Bradley turned pro in 2004 after an outstanding 140 amateur bout career.

Compact and powerfully built at 5′ 6”, Bradley may not be a puncher of the caliber of Maidana or Khan with just eleven knockouts from 26 fights, but he hits hard enough to get his opponents attention, sets a tremendous pace and takes a good shot. His nick-name ”Desert Storm” comes out of respect to the US servicemen serving in the Middle-East, and from the all-out-war he brings to a fight.

After the Witter victory, Bradley added the WBO title with a unanimous decision over Kendall Holt in March 2009. Bradley chose not to fight top contender Devon Alexander and instead took a lucrative match with 37 year old former multi-belt lightweight champion Nate Campbell.

In the third round of what had been a competitive bout, an accidental clash of heads opened a nasty gash over Campbell’s left eye and brought a premature end to the encounter, with Bradley retaining his crown with what would ultimately be ruled a no-contest.

Bradley boxed just once last year as he had only his second career bout at full welterweight and first since 2005. Bradley outpointed the previously unbeaten Argentinian contender Luis Carlos Abregu by a one-sided twelve round decision, proving beyond doubt that despite his lack of height, Bradley could make an impact at 147 lbs if he chooses. In fact Bradley was briefly on a short-list that included Andre Berto and Shane Mosley for the lucrative position of Manny Pacquiao’s next opponent. As we now know, the Pacman and his team decided to go with Mosley.

Bradley’s opponent on Saturday will be 23 year old Devon Alexander (21-0, 13 ko’s) of St Louis, Missouri. Had the two men fought immediately after Alexander’s stunning knockout of rock jawed Colombian Juan Urango last March, Alexander would have been the bookies favorite. However, last time out Alexander looked less than impressive as he struggled to outpoint the tough but limited former WBA champion Andriy Kotelnik in front of his hometown fans. As a result, Bradley is the 4/9 favorite with Alexander the 7/4 underdog.

If Bradley was an outstanding amateur, Alexander was truly exceptional, compiling a staggering 300-10 career record. Just seventeen when he turned pro, young Alexander had the benefit of befriending local St Louis boxing legend Cory Spinks when still an amateur. The pair have sparred countless rounds together, and Spinks, son of former World Heavyweight Champion and one-time Muhammad Ali conqueror Leon Spinks and a two-weight, multi-belt world champion himself, has been an invaluable mentor to the young prodigy.

Alexander was brought along steadily in his early years, his breakthrough victory being a twelve round decision over former WBO light welterweight champion DeMarcus Corley at Madison Square Garden in January 2008. Four wins and three stoppages later and Alexander was ranked no.1 by the WBC.

When Bradley vacated the title to take a fight with Nate Campbell, Alexander stopped Junior Witter in eight rounds to win the vacant WBC title. At times against Witter Alexander looked sensational, and his right hand was a constant problem for the former champion, who had struggled to make 142 lbs and injured his arm during the fight.

This writer felt that the muscular, extremely durable and explosive punching Juan Urango, the IBF title holder, would give young Alexander all he could handle when the two met in a unification fight last March. Urango after all had never come close to being stopped in his career and had mixed with big hitters like Randall Bailey, Levan Kirakosyan, Ricky Hatton and Andre Berto. For seven rounds that was the case, with Urango a point in front and a point behind on two of the scorecards. In the eighth Alexander felled Urango twice with tremendous right uppercuts, forcing the referee to stop the fight. It was the most impressive win yet for the young man from St Louis.

Alexander wanted to defend his title in his hometown next, and he got his wish, boxing at the 20,000 capacity Scottrade Center in St Louis, but his unanimous decision over Ukrainian hard-man Andriy Kotelnik, the man who lost the WBA title to Amir Khan in 2009, was his least impressive performance in years. In fairness to Alexander, Kotelnik has the kind of stubborn, awkward style that can make anyone look bad. Even Amir Khan had to employ his most basic and dull tactics to defeat the Ukrainian.

Can Alexander find another sensational performance like the ones we saw against Witter and Urango against Bradley on Saturday, or will ‘Desert Storm’ brush him aside with his mixture of fitness, speed and toughness?

Bradley employs the same tactics in the ring as Field Marshall Montgomery employed against Rommel in the North African desert during WW2; ”the best form of defence is attack.” He applies relentless pressure and controls the center of the ring brilliantly. His biggest asset is his incredible self belief; even in Junior Witter’s Nottingham back yard, Bradley fought as if he were the champion.

If Bradly is to beat Alexander, it is unlikely to be via a KO. One has to go all the way back to April 2007 for the last time Bradley won inside the distance, a 5th round TKO over Nasser Athumani.

By comparison, Alexander is the greater puncher of the two, and 10 of his last 13 fights have ended inside the distance. If he can connect often with the kind of right hands that finished off Witter and Urango, the fight will become very interesting indeed.

That said, I believe Timothy Bradley will be far too militant in both his preparation and during the fight to allow Alexander to achieve much success with the right hand. Bradley may not have been in the military, but he approaches his fights with military precision, and attacks like a relentless, invading army. If Kotelnik gave Alexander fits, Bradley will give him nightmares.

Bradley via a unanimous decision.