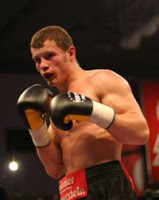 WBO world welterweight champion Robert Stieglitz scored an emphatic fifth round knockout of Ruben Eduardo Acosta in front of his home crowd at the Bordelandhalle in Magdeburg, Germany on Saturday night.
In was Stieglitz first defense of his title. Argentinian Acosta (23-4-5, (7ko´s), the current South American super middleweight champion, took the fight on just four days notice following the late withdrawal of Stieglitz original opponent, Colombian slugger Edison Miranda.
Acosta started surprisingly strongly, and had Stieglitz backing off in the first round with some wild hooks. The German, by far the better boxer of the two, took control of the fight in the second with his fast hands and sharp combinations. Stieglitz (37-2, 23 ko´s), a Russian born German, floored Acosta in the third with a left hook. Acosta was down again in the fifth from a right to the body. A barrage of unanswered shots from the German left the referee with no option but to call the fight off at 1:59 of the fifth. All three judges had Stieglitz 39-36 up at the time of the stoppage.

Stieglitz continues to look impressive since TKO losses to Alejandro Berrio and Librado Andrade threatened to derail his career. He has now won six fights on the bounce, and has to be rated as one of the top half-dozen fighters in the ultra-competitive super-middleweight division.
Showtime TV´s Super Six World Boxing Classic has six of the divisions big names including WBC champion Carl Froch, WBA king Andre Ward and Arthur Abraham tied up. Lucien Bute is the current IBF champion, and some argue the best fighter in the division. A unification fight between Bute and Stieglitz is the biggest fight on option for both of these men until Super Six reaches its conclusion. A sticking point would be Bute´s reluctance to fight outside of his beloved Quebec. If the Canadian based Romanian could be financially enticed to fight in Hamburg or Berlin, Stieglitz v Bute would do big business. Until then, the Stieglitz management team will try to reschedule his fight with the dangerous Miranda. The Colombian has only lost to Kelly Pavlik, Arthur Abraham (twice) and Andre Ward. Robert Stieglitz would dearly love to add his name to that select group.
The Super Six World Boxing Classic resumes in March when Arthur Abraham takes on Andre Dirrell, and continues in April with Carl Froch v Mikkel Kessler, followed by Andre Ward v Jermain Taylor.

On the Stieglitz v Acosta undercard, Russian heavyweight sensation Denis Boytsov (27-0, 22 ko´s) demolished American Kevin Montiy in two rounds. Boytsov floored the 6´5´´ Montiy (17-7-1 13 ko´s) in the first, and twice more in the second. The referee stopped the fight at 1:56 of the second.

The highly rated Boytsov (WBA no5, IBF no5, WBO no4) needs a couple of fights against quality heavyweights before challenging David Haye for his WBA title. A fight against once beaten Mexican-American Chris Arreola would be an excellent test for the 23 year old Boytsov.

Another heavyweight prospect, German based Syrian Manuel Charr raised his record to 14-0 (7ko´s) with an impressive tenth round TKO over Jamaican fringe contender Owen Beck.