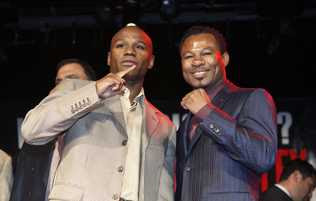 As much as he tries to emphasize the present, Shane Mosley can’t avoid a disturbing topic nearly a decade old.
Instead of talking only about his anticipated bout with Floyd Mayweather Jr. on Saturday night in Las Vegas, Mosley also has to deal with questions regarding his ties to the BALCO performance-enhancing drug scandal seven years ago.

The San Francisco Bay-area lab was frequented by athletes, many whose careers later were stained by accusations or convictions.

Although Mosley never was formally accused of using steroids, the cloud hovers over his career — still going strong at age 38. Mayweather has capitalized on the prefight media hype, repeatedly associating Mosley with performance-enhancing drugs.
The normally mild-mannered Mosley finally objected to a media member’s question on steroids during a conference call last week.
“That’s just a stupid question that you asked me, because I never did that stuff,” Mosley said. “I never was on it really like that. I’ve always been a clean fighter.” read more