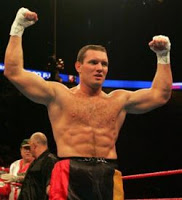 With European fighters currently holding all of the world heavyweight title belts and dominating world heavyweight boxing in general, Essex based Pole Albert Sosnowki has a chance to become king of them all, theoretically at least. Sosnowski fights Italian veteran, 39 year old Paulo Vidoz for the vacant EBU European heavyweight crown at York Hall, Bethnal Green this Friday.
In a division that lists the names Povetkin, Valuev, Dimitrenko and Adamek as its top four, this seems like an unlikely pairing. But the phrase involving gift horses and mouths springs to mind, and 30 year old Sosnowski no doubt intends to grab his opportunity. Sosnowski also knows that a lucrative clash with fellow Barry Hearn stable-mate Audley Harrison could follow if he can grab the EBU belt.
Sosnowski has compiled an impressive record of 44 wins against just 2 defeats with 1 draw, (27 ko´s) since turning pro in 1998. His biggest win by far was his eighth round TKO over former world title challenger and current British heavyweight champion Danny Williams. Equally impressive was his draw in his last contest against the highly regarded and current EBU no 5, Italy´s Francesco Pianeta. In Pianeta´s next fight, the young Italian went on to stop Matt Skelton for the EBU crown in September of this year.
Prior to that, Sosnowski´s outstanding wins were a two round flattening of Argentinian knockout artist Manuel Alberto Pucheta, and a ninth round stoppage of French prospect Steve Herelius. On the negative side, Sosnowski was stopped in nine rounds by Canadian Arthur Cook way back in 2001 for something called the WBC youth world heavyweight title , and after seven years without a loss, suffered a surprise decision loss last year against eccentric 39 year old American journeyman Zuri Lawrence.
At just under 6´3´´, Sosnowski tends to keep his weight under 230 lbs, and is always in excellent shape for his fights. He will need to be against the hugely experienced Vidoz.
Paulo Vidoz turned pro in 2001 after an impressive amateur career that culminated with a bronze medal in the super-heavyweight class at the 2000 Olympics, losing in the semi-final to Audley Harrison, the eventual Gold medalist.
Vidoz turned pro in Madison Square Garden with a first round knockout. The omenscould not have been better. But after winning his first eleven fights, the Italian dropped an eight round decision to Zuri Lawrence. Yes, the same Zuri Lawrence who beat Sosnowski last year. Vidoz, who up until then had boxed almost exclusively in the US, packed his bags and moved back to Italy. He went unbeaten in his next six fights, before conceding 90 lbs against an unknown Russian giant named Nicolay Valuev. Vidoz was TKO´d in 9.
Just two fights later, Vidoz claimed his biggest scalp of all, outpointing 6´8´´ German Timo Hoffman for the EBU crown in Germany. Since then, the Italian has been a solid competitor on the European heavyweight stage, defending his EBU crown against Britain’s big punching Michael Sprott, but losing twice to Ukrainian Vladimir Virchis, and also losing to Turkey´s Sinal Samil Sam, and Britain’s Matt Skelton, all in EBU title fights.
Vidoz takes the fight game very seriously, and is always in excellent shape. It’s not unthinkable that the Italian will hand Sosnowski a boxing lesson and take the EBU crown for a second time. He has an excellent chin and a wealth of experience at European level. But all things considered, a more likely outcome is a late stoppage win for the super fit Essex boy by way of Warsaw; Albert Sosnowski.
Big fight odds; Sosnowski ¼, Vidoz 11/4 bet365