Home Archive Sergio Martinez is Fighter of the Year 2010! 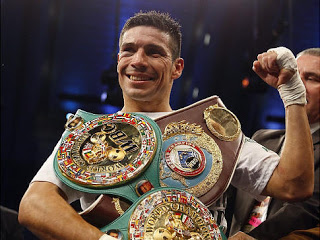 Question; What do Luis Firpo, Oscar Bonavena, Victor Galindez, Carlos Monzon and Sergio Martinez all have in common?

Answer; They are all tough, rugged, skillful fighters that grabbed the boxing world’s attention over the decades, and they are all Argentinian.

Firpo and Bonavena were never champions, but both men came within a whisker of beating great heavyweights of the day – Firpo when he knocked heavyweight champion Jack Dempsey out of the ring in the second round of their legendary 1923 title fight, and Bonavena when he twice floored an undefeated Joe Frazier in the second round of their 1966 thriller.

Victor Galindez twice held the WBA light heavyweight title in the 70’s. He made ten defenses in his first reign as champion from 1974-78, and was the dominant fighter in a golden era for the division, beating men like Jorge Ahumada, Richie Kates, Yaqui Lopez, Eddie Mustafa Muhammad, Jesse Burnett and Pierre Fourie.

Carlos Monzon is regarded by many, myself included, as the greatest middleweight of all time. He won the title destroying Italian idol Nino Benvenuti in ten sensational rounds in 1970, and defended it a record 14 times before retiring in 1977 (Monzon’s record has since been surpassed by Bernard Hopkins with 20 defenses.)

Like Galindez, Monzon competed in a golden era for the middleweight division, and beat men like Rodrigo Valdez, Bennie Briscoe, Jean Claude Boittier, Jose Napoles, Emile Griffith, Tony Licata and Tony Mundine in title fights. He suffered just three defeats in 100 fights, and was undefeated for the last thirteen years of his career.

While Argentina may not have produced the same number of great fighters as their Latin American neighbors Mexico and Puerto Rico, they still have a rich history of ring warriors to be proud of. In addition to those mentioned above can be added names like Pascual Perez, Nicolino Locche and Santos Laciar, among others.

Maidana has just given WBA junior welterweight king Amir Khan all he could handle in a contender for 2010’s Fight of the Year. In the sensational tenth round, he had Khan on the verge of a stoppage loss three times, and was only deprived of winning the title by a surprisingly brave referee in Joe Cortez. This writer will be disappointed if Maidana does not crown his career with at least one world title, although I would love to see him try his hand in the lightweight division.

Sergio Martinez began the year as the WBC light middleweight champion, a fighter who had emerged from virtual obscurity two years earlier to become one of the most exciting fighters in the sport of boxing, despite being in his mid-thirties.

Martinez was already 34 when he announced himself to the boxing world by beating up Kermit Cintron in February 2009, although ultimately only receiving a draw.

That December Martinez was involved in a sensational fight with one of the most feared men in boxing, the towering, vicious punching Paul ”The Punisher” Williams. When Williams deposited Martinez on the canvas in the first round, it looked disastrous for the Argentinian, but he got up and returned the favour, flooring Williams right at the bell. From then on the fight was fought evenly and at a frenetic pace. Williams may have won a controversial majority decision, but it was Martinez who emerged as a new superstar of boxing.

Following his performance against Williams, Martinez’s stock had risen to such an extent that when he challenged Kelly Pavlik for the WBC and WBO middleweight titles in April 2010. he was the bookies favorite. Martinez put on a barnstorming, career best display against the big punching, 6′ 2” Pavlik, dominating the early rounds, surviving a Pavlik mid-round onslaught and finishing the fight like like a train to win a well deserved unanimous decision.

No one could have forgiven Martinez if he had picked an easy fight for his first defence. Instead he chose the toughest fight out there, a rematch with Paul Williams. By now both men were highly ranked in the pound-for-pound listings, and Williams entered the the ring at Atlantic City’s legendary Boardwalk Hall as a slight bookies favorite.

The first round picked up where the first fight had ended, with both men going at it from the opening bell. At the end of the first round it looked like another classic was on the cards, and no-one could have foreseen was to happen shortly.

Early in the second round, Martinez threw an overhand left from his southpaw stance and missed Williams by millimeters. The overhand punch on a tall fighter is an excellent and seldom used tactic. A minute later, Martinez threw the same punch again. Bingo! The normally iron chinned Williams was out before he hit the canvass, shades of Roberto Duran v Tommy Hearns in 1984, and Martinez had scored without doubt the knockout of the year, and earned himself the title of Fighter of the Year, certainly in the eyes of The Boxing Post.

Just how much more can Martinez, who turns 36 in February, achieve? He was a semi-professional cyclist before discovering boxing, and didn’t turn pro until he was almost 23. With his blinding hand-speed and reflexes, genuine punching power and crowd pleasing style, Martinez does not look like a man who plans on quitting the stage that is championship boxing any time soon, and with his good looks, charisma and genuine respect for both his opponents and his chosen sport, boxing will hope he sticks around for a while.