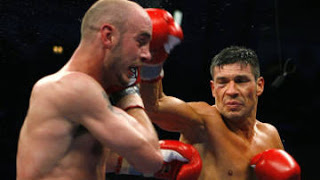 Sergio Martinez has made his decision. He is staying at middleweight. Martinez won the middleweight championship on April 17 in Atlantic City, N.J., by outpointing Kelly Pavlik with late-fight surge.
But Martinez was also a reigning junior middleweight titlist when he challenged Pavlik, and the rules of boxing’s sanctioning organizations prohibit a fighter from holding belts in multiple divisions.

Martinez had already been stripped of the WBO’s middleweight belt on May 29 because he had not yet told the organization of his decision. Faced with a deadline from the WBC, whose belts he held in the 160- and 154-pound divisions, Martinez made his decision on Wednesday, informing the organization via e-mail that he would keep the middleweight title, Sampson Lewkowicz, Martinez’s adviser, told ESPN.com.

“Sergio didn’t like to do it, but he gave up the junior middleweight title,” Lewkowicz said. “He’s fought twice at 160 pounds and he built up muscles. He thought maybe he will have to sacrifice too much to be at 154 again.”

At middleweight, Martinez (45-2-2, 24 KOs) also holds the Ring magazine title as well as the lineal championship. If a major fight presents itself, promoter Lou DiBella said Martinez would consider dropping down to defend his title at a catch weight between 155 and 160 pounds. read more