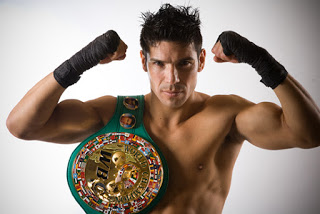 Sergio Martinez. : To boxing fans across the planet, the name conjures up an image of a handsome, swashbuckling, smiling assassin of a fighter.
A boxer who defies father time and physics in equal measures as he boxes on aged 37 in his customary style of hands held low – relying on the reflexes of a much younger man to avoid punishment and land the power punches that will carry him onto yet another victory.

Sergio Martinez will defend his WBC Diamond middleweight title, his Ring Magazine belt, and recognition the world over as the lineal world middleweight champion when he takes on Birmingham born Irishman Matthew Macklin on St. Patrick’s Day (this Saturday) at the most famous of all boxing venues – New York’s Madison Square Garden.

There may be bigger fights in 2012 (Mayweather v Cotto and Pacquiao v Bradley for example), but few if any will have the raw, throwback appeal of this matchup between two genuine old-school warriors, going head-to-head on an iconic date in an equally iconic venue.

Regarded by everyone whose opinion counts as the third best pound-for-pound boxer in the world behind Manny Pacquiao and Floyd Mayweather, southpaw Martinez is stuck in the unenviable position of being too big for the aforementioned top two in the world, yet just too small for the likes of Andre Ward, Lucian Bute, Bernard Hopkins and other potential big name fighters from super middleweight upward.

Of course if Martinez (48-2-2, 27 KOs) keeps on winning, and WBC light middleweight champion Saul ”Canelo”Alvarez keeps winning too, the Argentinian will indeed have his very own superfight against the man Oscar De La Hoya has been priming to be boxing’s next megastar.

In the meantime Martinez must keep and maintain a level that has made him the best boxer in the world of the past two years, in this writer’s opinion. In 2010, Martinez won a unanimous decision over Kelly Pavlik to lift the WBC and WBO middleweight titles. Later that year he defended them with an emphatic two round destruction of his previous conqueror – Paul Williams.

Last year Martinez looked better than ever as he knocked down the previously never floored Serhiy Dzinziruk no less than five times on the way to stopping the longtime WBO light middleweight champion in the eighth round. Last October he had his hands full with Britain’s Darren Barker, who broke the Argentinean’s nose and led on points at the halfway stage before Martinez took control and administered an 11th round knockout.

The Argentinian had dearly wanted Antonio Margarito to defeat Miguel Cotto in their rematch last December, so that he could have a rematch of his own against the only other man to defeat him. (Margarito TKO’d Martinez in seven rounds way back in February 2000). However, Cotto put on a master class of counterpunching to hammer the Mexican to a 10th round retirement loss. A Cotto v Martinez matchup is another potential superfight for the Argentinian, although Cotto himself has his hands full with his impending May 5 WBA light middleweight title defense against Floyd Mayweather.

On Saturday, Martinez will hope to keep his sharpness when he takes on British-born Irishman Matthew Macklin (28-3, 19 KOs). One could never accuse Macklin of taking the easy route to win a world title. Following his barnstorming display against long-standing WBA middleweight champion Felix Sturm last June, in which the German (boxing in his hometown of Cologne) barely held on to his title via a split decision, Macklin’s stock was at a career-high, and he could pretty much pick a crack at any of the middleweight champions.

To his credit, Sturm was keen to meet Macklin in a rematch, and when the Irishman chose instead to take the fight with Martinez, he faced another Brit – Liverpool’s Martin Murray – and was promptly held to a draw. We can only speculate that had Macklin taken the Sturm rematch, he would now be WBA champion.

29-year-old Macklin is an 11 year professional veteran and former ABA welterweight champion. Early career losses to Andrew Facey (L PTS 10) and Jamie more (L KO 10), the latter in a sensational 2006 brawl for the British light middleweight title were followed by a highly successful move up to middleweight that saw him win British and European titles.

Against Sturm, Macklin put on arguably his best ever display. With a venomous body attack coupled with savage hooks against the clean, straight precise punches of the German, Macklin was leading the fight until the final couple of rounds, when Sturm got his second wind and closed the show. While this writer believed the German had done just enough to retain his title, the majority of fans and experts, certainly from the UK, believed that Macklin should have won.

At 5’10” Macklin is the same height as Martinez, although the Argentinian outreaches him by three inches – 75” to 72”. Macklin is eight years the younger man, but Martinez was a late starter in boxing, only beginning his amateur career at 20 following a background in cycling and soccer, and not turning professional until he was aged 23.

Following his displays of raw courage against Jamie Moore and Sturm, no one can question Macklin’s heart, and it is guaranteed that he will leave every last ounce of himself in the Madison Square Garden ring on Saturday night.

However, in Martinez he is facing a genuine boxing phenomenon. The Argentinian is not only a supremely talented boxer and knockout puncher – he has a genuine blue-collar approach to the training side of the sport, and this is reflected in his astonishing condition and fitness. The key part of Macklin’s game is his body punching, but the problem is unlike Sturm, who stood still in the center of the ring and gave Macklin a target for large portions of their fight, Martinez has arguably the best footwork of any boxer in the world, and will present Macklin with far less to hit.

This fight will be highly competitive for the first six rounds, but Martinez will start to pull away in the second half . I see him scoring heavily with that looping overhand left of his, and I believe the fight will end on a 10th round knockout in favor of the Argentinian.