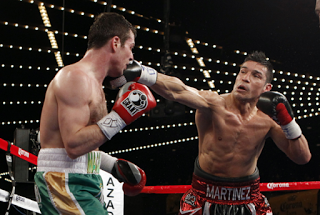 For the second straight time, the man regarded as the third best fighter on the planet was forced to dig deep to defeat a challenger from the UK.

The title up for grabs may have been only the WBC’s ‘Diamond’ middleweight belt, but every one of the thousands at ringside and the millions watching on TV knew that the fighter who stopped a brave but outclassed Matthew Macklin in eleven rounds in Madison Square Garden on Saturday night – Sergio Martinez – is the undisputed king of the middleweights and one of the top-three pound for pound fighters on the planet.

At 37, the Argentinian continues to live up to his nickname of ”Maravilla” (Marvelous in Spanish) taking all the British born Irishman could throw at him on St Patrick’s day in front of a vociferous, pro-Macklin New York crowd before scoring two eleventh round knockdowns to effectively end the fight.

Martinez (49-2-2, 28 KOs) admitted afterward that he had expected Macklin to come right at him from the opening bell, while instead the Irishman boxed a cagey fight in the early rounds, picking up enough points to be level with the champion after eight rounds, a tally bolstered by Macklin scoring a seventh round knockdown – or touchdown to be exact – though Martinez later claimed it was just a slip.

From the ninth round, much as in his previous fight against London’s Darren Barker, Martinez took complete control, and began scoring almost at will with his educated and vicious left hand. By the eleventh round Macklin’s face was a mess, with a cut over the left eye, swelling over both and a nose that appeared broken. The two late round knockdowns compounded the inevitability of the result, and although he survived the round, the referee and Macklin’s corner had only one option.

The result goes into the record books as an eleventh round retirement loss, and left Macklin with a still decent ledger of 28-4 with 19 KOs. Although he seems to have been around forever, Macklin is still only 29, and has just extended one of the very best fighters in the world. Expect to see him in more big fights, possibly even another world title shot.

Afterwards, Martinez spoke to HBO via an interpreter.

On Macklin’s early change of tactics he added: “He avoided me so I couldn’t do my job. I thought he would come to attack me, but he never did.”

Martinez dismissed the seventh round knockdown as a slip, and also revealed that he had predicted a tenth round KO over Macklin. “I missed the round by one and lost the bet!” hee said with a smile and a shrug.

Martinez, virtually unmarked after eleven rounds of combat, said he now wants to focus on winning back the WBC regular title that was taken from him in early 2011, when he chose to fight Serhiy Dzinziruk instead of the WBC’s no.1, Julio Cesar Chavez Jr. The WBC ”elevated” Martinez to the stature of ‘Diamond’ champion rather than strip him altogether.

He now wants the traditional belt back and stated: “I want to wait and win the title at 160 lbs. Chavez is the champion and I want the belt. I won it inside the ring and they took it away outside the ring. I want Chavez.”

Macklin said he was frustrated that the fight was stopped.

“I wanted to continue, but I’m never going to quit.”

He did admit that the fight was slipping away from him toward the end, adding: “I started reaching a bit and forcing things a little bit too much, and maybe played into Sergio’s hands a bit.”

Although Martinez would dearly love a bona-fide superfight against Floyd Mayweather or Manny Pacquiao, the truth is he is jut too big for either of those two. He weighed in at a shade under 159 lbs for this fight, and looked shredded on the scales. To get down to 150 lbs – as team Pacquiao have stipulated he would have to do for a fight to happen – he would have to remove a limb.

The big money fights for Martinez will be versus Chavez Jr who is a Mexican idol and improving all the time, Saul ”Canelo” Alvarez, the WBC light middleweight champion and already one of the hottest stars in boxing, and possibly Miguel Cotto, especially if he were to defeat Mayweather on May 5.

At 37 he cannot go on for ever, and a fighter of his talent and star quality deserves to make some serious money from the sport before he eventually bows out. However, based on last night’s performance, that wont be any time soon.