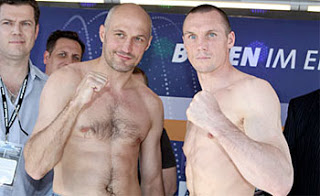 British middleweight hopes Matthew Macklin and Darren Barker will be more than interested observers this weekend when Germany´s Sebastian ”Hurrikan” Sylvester makes the second defence of his IBF middleweight title against no.1 contender Roman Karmazin of Russia on Saturday night.
The bout takes place at the Jahnsportforum in Sylvester´s home town of Mecklenburg-Vorpommern where the champion is always guaranteed fanatical support.

Former European champion Macklin is ranked 4th by the IBF, 7th by the WBO and 10th by the WBA, and holds a one round knockout victory over Sylvester´s former conqueror Amin Asikainen.
Darren Barker is the reigning European champion, although as of yet unrated by the major governing bodies.
Interestingly, the highly regarded website boxrec.com has Barker ranked 8th in the world, just behind 7th placed Macklin.

At 5’7” and possessing the upper-torso of a light heavyweight, Sylvester is a strong, no nonsense attacking fighter with a crowd pleasing style. He lacks explosive power, but grinds opponents down, relying on his tremendous strength and conditioning.

After a solid amateur background, Sylvester got off to the worst possible start as a professional, being knocked out in the first round by fellow debutant Yuri Zaystev in July 2002 in Berlin.
Sylvester bounced back, scoring five wins in that year alone, and by 2005 was European middleweight champion.

In June 2006, Sylvester lost his title in his third defence against undefeated Finn Amin Asikainen, suffering an eighth round TKO in a thrilling fight.
He regained it one year later, turning the tables on Asikainen and stopping him in the 11th round of another war.

Three more title defenses followed, including a 12th round knockout of Spain´s former two-time world champion Javier Castillejo in a WBA title eliminator, but in November 2008 Sylvester was well beaten on points by fellow German Felix Sturm for the WBA middleweight title.

Sylvester turned his attention to the IBF middleweight title vacated by German boxing icon Arthur Abraham, and in September 2009, he won the IBF title by outpointing Giovanni Lorenzo of the Dominican Republic on a split decision.

In his first title defence in January of this year, Sylvester stopped game but hopelessly outgunned American Billy Lyell in the 10th round. Lyell is a light punching journeyman who´s claim to fame was his upset split decision over John Duddy in April 2009. Former world champion Karmazin should present much tougher opposition for Sylvester.

The then globe trotting Karmazin was unbeaten for the first six years of his professional career, boxing in Spain, England, Germany, Estonia, Belgium, the United States as well as Russia, and winning the European light middleweight title along the way.

The following year Karmazin regained his European title, and defended it twice by knockout, including a third round stoppage of England´s David Walker in October 2003.

In 2004 Karmazin decided to base himself full time in the US, and after scoring a points win over former two-time WBC middleweight champion Keith Holmes, he outpointed Ugandan Kassim Ouma for the IBF light middleweight crown in July 2005.

Karmazin looked capable of becoming an outstanding champion, but he blew his title in his first defence one year later against Saint Louis speedster Cory Spinks, losing a close majority decision.

Marking time as he waited for another title shot, Karmazin was sensationally knocked out in ten rounds by Congo´s Alex Bunema in January 2008. The knockout was particularly brutal, and at 35, Karmazin´s career looked over.

Karmazin continued to box on, and scored wins over fading stars Bronco McKart and Antwun Echols in 2008 and 2009 respectively.

In January 2010, Karmazin found himself fighting in an IBF middleweight title eliminator against big punching Colombian Dionisio Miranda.
In a grueling encounter, Karmazin, now with Freddie Roach in his corner, climbed of the canvas to knock out Miranda in the 10th, despite being out on his feet just seconds earlier. The victory gave Karmazin the status of IBF no.1 contender.

Karmazin is tall for a middleweight at just under six feet. He employs a classic Eastern European straight up counterpunching style, with an excellent left jab and hook, plus a potent right cross. On the negative side, he is relatively slow footed, and his hand speed isn’t what it was five years ago. He is tough and resolute with a wealth of ring experience, and the Miranda knockout proved he has lost none of his desire.

Sylvester v Karmazin looks likely to be a classic ‘peer-six brawl,’ with two game but limited fighters (in Karmazin´s defence his limitations are mainly age related) going at it as if their lives depend on it.
Sylvester loves to go to war, and Karmazin´s lack of mobility will leave no option but to engage him head on.

Karmazin looked in desperate trouble against Miranda, and Sylvester is a much better fighter than the Colombian. If Sylvester can avoid Karmazin´s still dangerous counterpunches, he should be just too young and too strong for the Russian.

Sylvester by 8th round TKO.