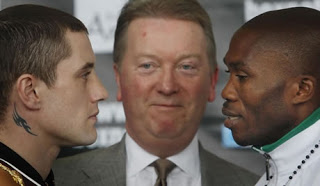 Scotland’s Ricky Burns makes the first defense of his WBO lightweight title when he takes on Namibian challenger Paulus ”The Hitman” Moses at the Braehead Arena in Glasgow on Saturday night.
Burns is looking forward to defending his crown against Dagenham’s Kevin Mitchell at West Ham’s Upton Park Stadium in the summer, but he would be advised not to show complacency toward Moses, who has knocked out 19 of his 28 victories and is a former WBA lightweight champion.

28-year-old Burns [33-2, 9 KOs] became a two-time world champion earlier this year when Juan Manuel Marquez chose to vacate his WBO lightweight title and compete at junior welterweight. Burns had won the WBO’s interim version of the title with a comfortable points win over the always dangerous Australian Michael Katsidis last November, and as a result of Marquez’s decision, was elevated to full champion.

Burns had previously had a stint as the WBO super featherweight champion, climbing off the canvas in the first round to dominate Puerto Rican star Roman Martinez to win the title by a unanimous points decision in September 2010. Three title defenses followed against Andreas Evensen [ PTS 12], Joseph Laryea [RTD 7] and Nicky Cook [TKO 1], all in 2011.

A rangy 5’10”, Burns always looked as if lightweight would be a good fit for him, and when he faced Katsidis, his heavily tattooed frame looked big and strong at 135 lbs, and far from slight alongside the stocky, strongly built Australian, as Kevin Mitchell had appeared when they fought in 2010, when the Londoner was kayoed in three.

Burns looked a natural lightweight, and was never troubled by the heavy hitting Katsidis, dominating the fight with his outstanding left jab, and stunning the Aussie with snappy right crosses.

Katsidis had suffered a defeat seven months earlier against the very capable Californian Robert Guerrero, himself a former IBF featherweight and super featherweight champion. Guerrero is Burns’ mandatory challenger, and it remains to be seen if the WBO insist on the two meeting prior to the Scot’s guaranteed big-money matchup against Mitchell.

In the meantime, the Scot will have his hands full on Saturday with a dangerous challenger who will fully intend to take the title back to his homeland.

33-year-old Paulus Moses [28-1, 19 KOs] became only the second ever world champion from Namibia [former WBO light middleweight and middleweight champion Harry Simon was the first] when he outpointed Yusuki Kobori in Japan in January 2009. Six months later, Moses defended his title against another Japanese fighter, Takehiro Shimida – a one-time victim of the late Edwin Valero – with a points decision.

Moses was not expected to have too many problems with his next challenger, Venezuelan Miguel Acosta, a rugged veteran who had earned his title shot with an upset ninth round TKO of the previously unbeaten Urbano Antillon. Moses and Acosta faced each other in Namibia in May 2010, and for five rounds it was nip and tuck with the champion slightly ahead.

Late in round six, Acosta connected with a pair of fast but seemingly ineffectual right hands to the side of Moses’ head, and the champion went down heavily. Although he sat up and looked clear eyed, he made no effort to rise and was promptly counted out.

Like Burns, Moses scored three wins in 2011, but unlike the Scot, he faced journeyman opposition. Nevertheless, he is ranked 4th in the world by the WBO and 6th by the WBA and could give Burns a hard night’s work on Saturday. The 5’8” Moses is a career lightweight, has fast hands and footwork, an excellent jab and a dangerous left hook. His 72” reach is two better than Burns, and if both men choose to box, the Scot may find himself out jabbed.

Burns proved against Katsidis – one of the biggest lightweights in boxing [reportedly he rehydrates by as much as 20 lbs] – that he is strong at the weight and cannot be bullied. I feel he needs to use that strength on Saturday, and take the fight to Moses with aggressive boxing. I feel Burns can hit harder at lightweight, and it’s just a question of planting his feet at the right opportunities.

The knockout loss to Acosta revealed a vulnerability in Moses, and while I don’t think Burns will knock him out with one clean shot, I believe that he will break his challenger down with solid, aggressive boxing, come on strong in the second half of the fight, and batter Moses along the ropes in the tenth for the TKO.