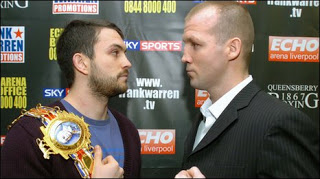 Liverpool´s Paul Smith returns to Merseyside´s Echo Arena this Friday night for the first defense of his British super-middleweight title. He comes face-to-face with former British champion and fellow scouser Tony Dodson in the featured fight on Sky TV´s Friday Fight Night.
Smith and Dodson are part of a ´holy trinity` of talented scouse super-middleweights that also includes Tony Quigley, the man Smith beat to win the British title in a thriller last October.

No one could have predicted way back in 1991 when Chris Eubank stopped Michael Watson for the WBO crown that the super-middleweight division would go on to become British boxing´s happiest hunting ground for the next 20 years.

Prior to that fight, British boxers had had little success in the twelve stone class, the sole exception being Scot Murray Sutherland´s brief reign as IBF champion in the mid-eighties.

After Eubank had turned the trick, Nigel Benn, Steve Collins (okay, I know he´s Irish, but that´s still the British Isles!) Robin Reid, Glen Catley and Richie Woodhall all won versions of the world super-middleweight title. Henry Wharton and David Starie were outstanding contenders who would have been world champions in another era.

Joe Calzaghe won the WBO super-middleweight crown in 1997, and went on to dominate the division for the next decade. Currently, Nottingham´s mighty Carl Froch is the proud holder of the WBC crown, a title he defends next month against the very dangerous Dane Mikkel Kessler, himself a former two-time WBA champion.

27 year old Paul Smith (28-1, 15 ko´s) is currently ranked no.4 by the WBO, who´s champion is Germany´s highly capable Robert Stieglitz. A convincing performance against Tony Dodson will move him further up the rankings and a step closer to a world title shot.

Smith won the British title from Tony Quigley in a barn-burner of a fight last October. The Echo Arena was packed with 8000 screaming scousers that night, and they witnessed a classic see-saw, give and take tear-up. After the fight, promoter Frank Warren promised the fans a rematch between the two.

This writer took the view that Smith should move forward, rather than indulge in entertaining but career shortening fights like a rematch with Quigley. Smith will find that there are plenty of other fighters in the talent laden super-middleweight division who can give him all that he can handle. Any one fighter has only so many wars in him. The trick is to gain maximum riches and glory from those fights.

Instead of a Quigley rematch, Smith has elected to fight former champion Tony Dodson, the man who Quigley defeated in another thriller back in March 2009 for the vacant British title.

29 year old Dodson (24-5-1, 12 ko´s) is now in his eleventh year as a pro. After losing just one six round decision in his first 17 fights, Dodson suffered back-to-back 9th round TKO defeats against future Carl Froch victim Albert Rybacki of Poland in October 2002, and French journeyman Pierre Moreno in April 2003.

Following the Foster victory, Dodson suffered a succession of injuries that kept him out of the ring for almost two years. He returned in late 2005, and after four wins against admittedly moderate opposition, he challenged Carl Froch for his British and Commonwealth belts in November 2006. Unfortunately for Dodson, the lack of quality fights over the previous three years showed, and he made little impression on the future world champion. Dodson was dispatched in the third when a scything body shot left him writhing on the canvass, unable to beat the count.

It was back to the drawing board for Dodson. Four more wins, once again against moderate opposition put him into another British title fight, this time with the raw but talented Tony Quigley. Ironically, Dodson put on his best display in years against the baby faced 24 year old, but ultimately it was not enough, and Dodson was TKO´d in the 12th round.

There is no love lost between Smith and Dodson. Despite the fact that Smith is the reigning champion and has fought all but two of his 29 pro fights in the twelve stone weight class, Dodson claims Smith is too small for the super-middleweight division and should drop down to middleweight. He has also branded Smith ”the Peter Andre of boxing.”

A furious Smith retaliated in an interview earlier this week.

“When I see Dodson at the weigh in on Thursday I fully expect his hands to be shaking,” blasted Smith, “But it will be his legs that will turn to jelly once I land on his glass jaw on Friday night. Dodson has always had a problem with pressure, and I don’t expect things to change this week. For me, he’s the Jellyman of British boxing, always has been, always will be. He has got a soft centre and I will expose it on Friday.”

“Dodson trembled against Carl Froch, he teetered against Tony Quigley and he will flop against me. His chin isn’t good enough for this level and once I land on it, he’ll be knocked him out. I’ll be turning up the heat on Friday, and Dodson will melt, he can’t stand the heat. The Echo Arena is a fantastic place for boxing, and it’s going to be like a pressure cooker on Friday night. That’s the kind of atmosphere I thrive in, but I know that secretly Dodson would prefer to be at home looking at his computer.”

The truth is Paul Smith in on fire at the moment, and Tony Dodson is lucky, or indeed unlucky to be sharing a ring with him.

Smith wins this one inside the distance, and he might make it quick.