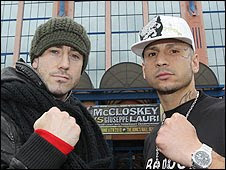 McCloskey v Lauri is the featured bout on this week´s Live Friday Fight Night on Sky Sports 2 and will be shown live from 10 pm.

30 year old McCloskey (20-0, 10 ko´s) is currently ranked 7th by the WBC, and an impressive performance against Lauri could lead to a world title shot against WBC/IBF champion Devon Alexander, or a possible domestic matchup with WBA champion Amir Khan.

For now, McCloskey is focused on the job at hand. In a press conference this week he said;

“A world title shot is at the back of my mind but I cannot afford to think about that right now. I have got to be focused and do my job on Friday night. If I don’t, I will not be moving on.”

On fighting in front of the famously fanatical supporters at the King´s Hall in Belfast McCloskey said;

“I have fought there twice and it was amazing. When you look at the big names who have boxed there, it really is an honour. It is hard to believe that it is nearly 30 years since there has been a European title fight at the King’s Hall. I have trained hard and am going there to do a job.”

After a solid but unspectacular amateur career, McCloskey turned pro in March 2005, and soon found that the professional game suited his style more than the amateurs.

Fighting regularly on bills in Ireland, Scotland, Wales and England, after thirteen straight wins McCloskey was good enough to batter 51 fight veteran Tontcho Tontchev of Bulgaria to defeat in four rounds for the IBF international light welterweight title in December 2007.

Four months later, McCloskey was too much for once beaten Dean Harrison in a British title defence, winning in just four rounds, and in November 2009 McCloskey TKO´d Spain’s´s Daniel Rasilla in nine rounds to claim the vacant European title.

With his hands held low and relying on his reflexes for defence, McCloskey utilizes an unconventional boxing style that can be likened to a southpaw version of former IBF light welterweight champion and recent Amir Khan victim Paulie Malignaggi. However unlike the New Yorker, McCloskey, with a 50% knockout ratio in his fights, carries a lot more punching power than the feather-fisted Malignaggi, power he may need on Friday night.

34 year Giuseppe Lauri (50-6, 29 ko´s) just might be McCloskey´s toughest test so far. The tattooed, shaven headed Italian held the European light welterweight title from 2007-2009, defending it successfully three times, and has won his last eight fights dating back to 2007.

Despite his appearance and high knockout ratio, the Italian is more boxer-puncher than slugger. Lauri is rated by the E.B.U as McCloskey´s mandatory challenger, and has to be taken seriously by the Irishman.

However, McCloskey has been looking world class for some time now, and with the King´s Hall contingent behind him, it will take more than Giuseppe Lauri to derail his quest for a world title.

McCloskey by TKO in six.