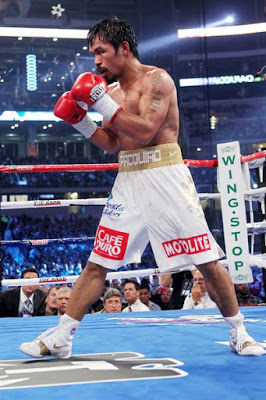 Pacquiao meets Mosley in May!

So the wait is over. Manny Pacquiao will defend his WBO welterweight title against three weight world champion Sugar Shane Mosley at the MGM Grand in Las Vegas on May 7th.
Speculation had surrounded the Filipino recently about a proposed unification matchup with WBC welterweight champion Andre Berto, or a third fight with lightweight king Juan Manuel Marquez, but Pacman, and promoter Bob Arum, have gone with the fight they believe has the biggest box office potential.

“We came to a meeting of the minds,” said Top Rank promoter Bob Arum “[Top Rank matchmaker] Bruce Trample says it’s a very difficult fight. I believe it will be an exciting fight. Shane knows how to fight and how to deal with the speed. Manny is in for a hellacious fight. I really believe styles make fights.”

39 year old Mosley (36-6-1 39 ko’s), a former world champion at lightweight, welterweight and light middleweight, was keen to dismiss speculation that he is past his prime:
“I know that they think I’m an old man and that Manny is going to beat me. Let them think that. I still have power and speed. They thought I was done before I knocked out [Antonio] Margarito, too. So they can think whatever they want. I know what I can do. I hurt Floyd in our fight, but he’s a great fighter and has great defense. But Pacquiao? Come on, man. I’m a bigger guy than him and he gets hit. And you saw how I hurt Floyd. Manny is going to come forward and I will hit him on the chin at some point. His defense is not like Floyd’s. Manny will come at me, and I will knock him out.”

Should we get excited about 32 year old Pacquiao (52-3-2, 38 ko’s) taking on Mosley? In a word – yes! In the same way we loved to watch Ali, Leonard and Tyson, because THEY were fighting, we now just want to see Manny Pacquiao, the opponent is secondary.

The Pacman is by far the biggest superstar in boxing today, and also its most exciting exponent. Anyone who finds watching Pacquiao boring is no fan of the sport of boxing. Even his one-sided points win over defensive minded Joshua Clottey in March was compulsive viewing simply to see Pacquioa’s complete mastery of the art of moving and punching with volume, precision and power.

Let’s not be too quick to dismiss Mosley as a shot fighter. The event got the better of him against Mayweather, and he will be keen to make amends this time round. It should be an exciting, open fight between two guys who, unlike Mayweather, actually love the thrill of combat. I for one can’t wait!