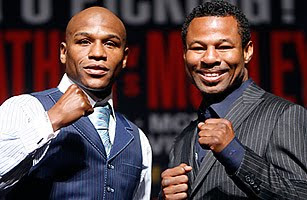 Amazingly, when WBA welterweight champion ”Sugar” Shane Mosley goes head to head with five-weight world champion ”Pretty Boy” Floyd Mayweather in their super fight at the MGM Grand Casino in Las Vegas in the early hours of Sunday morning, Mosley´s WBA belt will not be up for grabs.

Despite earning an estimated $75 million in his undefeated career, 33 year old Mayweather has declined to pay a sanctioning fee of 3% from his original purse to the WBA. Once his share of the pay-per-view money is added, Mayweather could take home more than $30 million as his cut from the fight, but has chosen, somewhat unfairly in this writers opinion, to rob fans of a legitimate world title bout.

Could this be an indication that Mayweather is less than 100% confident of the fight´s outcome? When one considers how much clout a legitimate world title would add to negotiations for what would be Mayweather´s ultimate payday – a mega matchup with WBO welterweight champion Manny Pacquiao, one has to wonder about Mayweather´s mindset. After all, Mayweather has been paying sanctioning fees to the WBC since 1998 without complaint. Why start now?

Mosley has lost five decisions, against the late Vernon Forrest (twice) Winky Wright (twice) and Miguel Cotto – all outstanding fighters in their own right.

Amazing as both men´s ring achievements are, they will count for little when they enter the ring on Sunday. To asses the outcome of what is a truly mouthwatering encounter, we need to analyze both fighters most recent ring appearances.

Floyd Mayweather returned from a 21 month layoff last October to outpoint WBA lightweight champion Juan Manuel Marquez over 12 rounds. It was a by-the-numbers win for the ”Pretty Boy” who failed to win just three rounds on the combined scorecards of the three ringside judges. In a bout that for the whole lacked excitement, there were two points of interest; the first was that Marquez caught Mayweather several times with straight right hands, causing Mayweather to grin, as if saying ”that didn’t hurt”, almost Tommy Hearns like.
The second point is related to the first; in the second round, Marquez tagged Mayweather with a solid right, and when he moved in to capitalize on his success, Mayweather nailed the Mexican with a perfect left hook that floored him heavily. Marquez is a tough guy, and has never been stopped in 56 fights. He climbed of the canvas three times in the first round of his epic 2004 encounter with Manny Pacquiao, and fought back to gain a draw.

Mayweather, much the bigger man, had an excellent chance to become the first fighter to stop Marquez, yet after taking an eight count, it was the Mexican who was the aggressor, backing Mayweather up and ensuring that a knockout loss was the last thing that would happen. The rest of the fight resembled the third Leonard v Duran bout (though not quite as bad), with Marquez pursuing Mayweather without enthusiasm, and the American more than happy to stay out of harms reach and pile up points.

In comparison, Shane Mosley´s WBA welterweight title winning victory over Mexican hard case Antonio Margarito was a tour de force – the type of jaw dropping performance that only comes along once in a while.

At 37, Mosley was a 3/1 underdog to defeat the powerful Margarito, at 5’11” a freakishly big and strong welterweight who hit like a train and possessed a chin of pure concrete.
Whether it was the pre-fight discovery by Mosley´s trainer that Margarito had intended to fight with plaster of Paris inserts in his hand wraps that fired up the American, or that the Mexican´s static, straight ahead style would always be made for him, within seconds of the opening bell it was Mosley who was on the attack, throwing lightning fast punches to Margarito´s head and body. Mosley utilized his excellent reflexes to stand straight in front of Margarito, guard down, and yet avoid the Mexican´s punches. Those that did get through were absorbed almost disdainfully. Mosley battered Margarito unmercifully, flooring the Mexican in the eight and again in the ninth, forcing the referee to stop the slaughter. The win has become Mosley´s career defining fight, even more so than his two wins over Oscar De La Hoya, and one of the great performances in recent boxing history.

Of course, Floyd Mayweather presents a completely different set of tactical problems for Mosley. Unlike Margarito, Mayweather wont keep coming forward and waiting to be hit. Whether you like him or loathe him, Mayweather is a defensive genius and extremely hard to tag with a solid shot.

Against Ricky Hatton, Mayweather took risks and mixed it up, but against De La Hoya he ran all night. Against Mosley we can likely expect another extremely defensive performance from Mayweather.

So how can Mosley do what no other fighter has done and defeat Mayweather? Basically, by being himself. The fact is Mosley, even at 38, will be the best fighter Mayweather has ever fought. He still has phenomenal hand speed – as least as fast as that of Mayweather – he has a great chin, and he possesses genuine knockout power in both hands.

But the key factor – and what will ultimately cause Mayweather´s downfall, is Mosley is a GREAT body-puncher, virtually a lost art in modern boxing. There will be no sanctuary on the ropes for Mayweather, and he will find it impossible to safeguard his chin AND his ribs for twelve rounds.

Expect fireworks right from the opening bell, and don’t be surprised if a fired up Mosley connects early. Mayweather may be the master of defence, but Mosley is the master of attack, and his shots come from all angles.

The closest Mayweather ever came to defeat was his split decision over Oscar De La Hoya in 2007. Oscar was an excellent boxer with great hand speed and a solid punch, but a little one dimensional as a fighter, yet he came within a whisker of beating the ”Pretty Boy.”
Mosley twice defeated De La Hoya, and is a much better fighter than Oscar was.

”Sugar” Shane is a big, powerful 147 pounder, and far from one dimensional. Come Sunday morning, he will have a little too much of everything for Mayweather, who may have to go into extreme defensive mode just to try and last the distance.
It wont be enough.