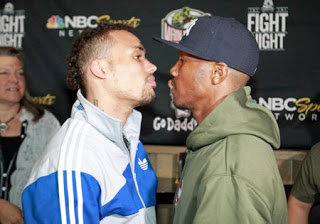 Former two-weight world champion Zab Judah takes on the dangerous and undefeated Vernon Paris in an eliminator for the IBF light welterweight title at the Aviator Complex in Brooklyn, New York on Saturday night.
The winner of Judah v Paris will likely face the victor in Lamont Peterson’s upcoming rematch with Amir Khan for the IBF and WBA light welterweight titles on May 19 at the Manderlay Bay Casino in Las Vegas.
Judah has been one of the most high-profile fighters in boxing for the last decade and a half, involved in big ‘event’ fights against the likes of Kostya Tszyu, Floyd Mayweather, Miguel Cotto and Amir Khan. Although now in his mid-30s, Judah retains much of his speed, skill and power, and still brings a lot to the bargaining table. By comparison, Vernon Paris is a decade younger than Judah and lacks big fight experience, but he is a young, undefeated fighter with a good amateur pedigree on the ascent and looking to add Judah’s name to his CV.
34-year-old Zab Judah (41-7, 28 KOs) is a 16 year pro veteran who has won world titles at light welterweight (three times) and welterweight, and has defeated big names like Micky Ward, Darrell Tyson, Junior Witter, Terron Millet, Reggie Greene, DeMarcus Corley, Cory Spinks, Rafael Pineda, Lucas Martin Matthysse and Kaizer Mabuse during his outstanding career. Each of his even career losses have come in world title fights.
Judah was raised on the same tough Brooklyn streets as his number one fan Mike Tyson, and has never been far from controversy. When he lost his IBF light welterweight title to the Australian-based Russian Kostya Tszyu in 2001 on a sensational second-round knockout, so incensed was he at referee Jay Nady’s decision to stop the fight, he hurled his ring stool at a him and then punched him in the throat. His actions resulted in a $75,000 fine and a six-month suspension.
In the biggest fight of his career against Floyd Mayweather five years later, Judah boxed like a dream for the first five rounds of the fight and at that point it looked as if an upset may have been on the cards. However Mayweather turned the contest around with a big sixth round, and by the ninth looked to be heading for a stoppage win.
Late in the 10th round, Judah hit Mayweather with a blatantly low blow, and then followed it up with a hard punch in the back of the head. As referee Richard Steel called time to allow Mayweather to recover, his trainer and uncle Roger Mayweather enter the ring and tried to attack Judah. Moments later Judah’s trainer – his father Joel – leapt to his sons’ defense and it soon escalated into a full-scale brawl between both corners.
When the ring was eventually cleared, the action resumed and Mayweather cruised to a unanimous decision. After the fight, Judah was hit with a $350,000 fine (second only to Mike Tyson’s $3 million fine for biting Evander Holyfield’s ear in 1997) and had his license suspended for one year.
Most recently against Britain’s Amir Khan last July, Judah looked outclassed for the first four round of the fight, and when floored with a legitimate and vicious body shot in round five, tried his best to get Khan disqualified. It didn’t work and the fifth round knockout win for Khan still stands.
Now Judah faces a hungry young opponent in what could turn out to be his last throw of the dice.
24 year old Vernon Paris was raised on the mean streets of Detroit, barely surviving his city’s gang culture. A talented amateur who trained at Detroit’s iconic Kronk Gym and won a junior Olympics gold medal, Paris was shot three times in an attempt on his life in 2006. He still carries bullets in his thigh and back today. In 2008 he suffered a collapsed lung after being stabbed in the chest during an argument.
Inside the ring, Paris hit the pro ranks in 2006 and fought nine times that year and nine times in 2007 against moderate oposition. The stabbing incident kept him out of the ring for most of 2008/09, but he was back with five fights in 2010, defeating solid pros like fringe contender Courtney Burton and former world title challenger Oscar Leon.
In 2011 Paris took a massive step up in class when he faced fellow prospect Tim Coleman for the USBA light welterweight title. A vicious pre-fight war of words saw Coleman call Paris a ”crackhead”, alluding to two Paris wins later changed to no-contests after he failed post-fight drug tests for marijuana use.
The fight itself was a sensational affair that saw Paris dropped by a right hand in round two, but go on to floor Coleman three times with hard body shots en-route to a seventh round TKO. The win pushed Paris up the IBF rankings to fourth, one place behind Judah (the IBF’s top two ranking slots are vacant.)
One has to wonder just how much passion and desire Zab Judah has left going into Saturday’s fight. After surprising many experts with his seventh round TKO over a rampaging Kaizer Mabuza for the vacant IBF title last March, he was comprehensively dismantled by Amir Khan just four months later.
Despite his protestations of a foul, Judah knows he was outclassed, and when one has an ego the size of Zab’s, that is a bitter pill to swallow. He knows, should he win this fight, he will face either Khan or Peterson, two much bigger, stronger, younger rivals that have the beating of him.
Paris has nowhere near the skill level of Judah, who is still one of the smoothest and most stylish boxers in the game. If Zab can keep it as a boxing match, he should win by a clear points margin. If the fight becomes a war, Paris’s body shots will end the contest by the late rounds.
I believe it will be the former, and I see Judah keeping his cool and edging out a close decision over twelve rounds.