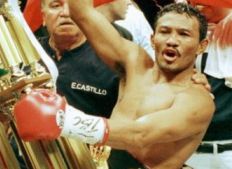 The proliferation of sanctioning bodies and world titles has done much to blur the overall landscape of our sport over the last quarter century. Gone are the days of one recognized championship for each weight class.

It has come down to a handful of recognized major world titles and the remote chance that somewhere down the line, demand, planetary alignment and the necessary money will materialize for title unification or even a partial unification to determine just who is the true world champion in a given weight class.

Of course even in this day and age winning a major world title is still a considerable accomplishment. It’s a golden ticket to greater opportunity and an enhanced bank account if correctly utilized. The reality is only a handful of diligent prizefighters manage to ascend such a steep slope. Despite all of the alphabet soup marring the clarity of our time-honored sport, only a select few manage to reach that rare championship summit. Taking it further, winning a second major world title, or even a third or fourth, in as many weight classes, is an even more unlikely feat. To many this issue may come down to old fashioned hair-splitting, but the odds suggest it takes considerably more than just some good connections, timing and a dash of good luck. I hold that there has to be something special at play; a degree of greatness involved.

I remember October 29th 1987 like it was yesterday and not a quarter century ago. Thomas Hearns became the first fighter in boxing history to become a 4-division champion with a dramatic 4th round knockout of Juan Domingo Roldan to win the WBC middleweight title. In the lead-up to it fans and media types alike wondered if such a feat could be accomplished. Moments after the win, the hair-splitting began in earnest, but to me it didn’t matter; such feats are reserved for only a selected few. Hearns’ accomplishment was unprecedented.

I decided to review the short list of those special fighters that have managed a fourth major world title in as many weight classes. Of the twelve men to date that have managed such a feat, one in particular, Venezuela’s Leo Gamez, did it virtually under the radar and without the fanfare and adulation one would expect from such a rare undertaking, and at a point in time where fan focus was on far more celebrated names such as Floyd Mayweather JR and Manny Pacquiao.

A former World flyweight champion, the orthodox Gamez became the first flyweight boxer in history to win major world titles in four different divisions. Standing a mere 5’0 tall and having but a hair’s breadth more than 63” reach, ‘Torito’ started his unlikely career with a 4-round decision victory over the equally invisible Francisco Garcia in Maracay, Venezuela on Valentine’s Day in 1985. Later that same year in April, he notched his second victory, another 4-round points win, this time over Alcides Hernandez, also in Maracay. After those two initial distance wins the diminutive ‘Torito’ scored six consecutive knockouts, including two over Rafael Lara, and one in his first fight outside Maracay, held in August  at El Guayabo, where he beat Jose Escorcia in the 4th round. In November of 1986, he would go on to beat Escorcia’s brother, Alberto, also by knockout in four rounds, at Maracaibo. He suffered his first career setback in February 1987 when he was held to a 2-round technical draw by Rafael Bolivar.

In April that same year ‘Torito’ received his first shot at a minor title when he faced Pedro Nieves for the National light flyweight title. Gamez won the championship by 2nd round knockout. He defended the title once and won a handful of non-title bouts before shedding weight and moving down a division in order to get his first world championship opportunity. 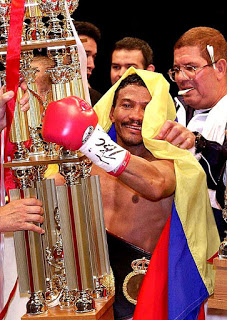 In January 1988, Gamez fought for the vacant WBA World minimumweight title against Bong Jun Kim. Boxing aggressively, ‘Torito’ won his first major world champion in hostile territory, edging Kim over twelve competitive rounds in South Korea.  Managerial woes served to complicate his new appointment, thus he managed only one title defense, knocking out Kenji Yokozawa in the 3rd some three months later in Japan. Not long after, Gamez endured an extended eighteen month layoff after suffering an arm injury in the gym, interrupting his new found career momentum and acclaim.

In October 1989 he returned to active ring duty, scoring two knockout wins in non-title bouts before moving up a weight class to challenge Myung-Woo Yuh for the WBA World light flyweight title in April 1990 in South Korea. ‘Torito’ lost a controversial twelve round split-decision; consensus opinion among observers was that he deserved the win, and in reaction the WBA ordered an immediate rematch. Seven months later he would again fight Woo Yuh, losing a more clear-cut twelve-round unanimous verdict.

Disillusioned, Gamez was inactive for the better part of a year. Having been promised a title try by the WBA, he returned to active ring duty in South Korea, where he moved-up in weight yet again, this time to 112lbs to challenge WBA flyweight champ Yong Kang Kim in October 1991, losing by unanimous decision. Undaunted at the setback and determined to get into a positive career stride, Gamez won four comeback bouts before once again dropping weight in order to challenge for a world title in a lower weight class.

His third try at the WBA World light flyweight title, left vacant after Woo Yuh’s retirement, came November 1993 against Shiro Yashiro in Tokyo, Japan. Having managed to outfight and knock Yashiro out in the 9th round, ‘Torito’ had won his second major world title in a second weight class.

Continuing with his championship career, he defended the WBA World light flyweight title successfully three times in foreign locales such as Panama and Thailand before losing it to Hi Yong Choi in February 1995, again in Korea. His first opportunity at joining the elite group of fighters that had won major world championships in three different divisions, and his second attempt at becoming a major world flyweight champion came in March 1996 when he challenged Saen Sor Ploenchit for the WBA World flyweight title in Thailand. Despite a fine showing, Gamez dropped a close and competitive12-round split decision to Ploenchit.

Three years after losing that close history making tiff in Thailand, a reinvigorated Gamez finally joined that exclusive elite group of 3-division world champions when he knocked out defending WBA World flyweight champion Hugo Rafael Soto in the 3rd round in March1999. The fight, held at New York’s Madison Square Garden, the so-called Mecca of boxing, also marked his debut as a professional fighter in the United States. Where his boxing career was concerned, it was undoubtedly the best of times.

His next bout in May 1999 saw him annex the “interim” WBA World super flyweight title by knocking out former WBO light flyweight champion Josue Camacho in the 5th round at the Roberto Clemente Coliseum in San Juan, Puerto Rico. Not yet generally considered to be a four division world champion, because the WBA had conditioned their recognition of him as the super flyweight champion on either one of two things: that the reigning WBA champion, Hideki Todaka, would vacate the title or ‘Torito’ would have to defeat him in the ring.

During this period, Gamez’ career took an unexpected turn when he lost his WBA World flyweight title to Sornpichai Kratingdaengym by knockout over eight brutal rounds in Thailand. It marked the first time he had lost by stoppage to that point in his career and the fluctuation in poundage moving between divisions had taken a toll on his ability inside the ring. But fate intervened, and Gamez finally received the opportunity to move beyond his status as the “interim” WBA World super flyweight champion when WBA World super flyweight champion Hideki Todaka agreed to defend against him in October 2000.

Once again Gamez defied the odds and made boxing history, stopping the gallant Todaka in seven torrid rounds, winning the WBA World super flyweight title and becoming a four division champion in the process. In doing so, he joined that small but extremely elite group of fighters that have won major world titles in four different classes, becoming the first among them to have at one time held the world flyweight title, while proudly being the first to represent Venezuela at such an elite level.

As previous portions of his long career had gone, so did too his first defense of the WBA World super flyweight title, held in March of 2001 in Yokohama, Japan; losing the crown by a 12th round knockout to Celes Kobayashi. Despite the defeat and the reality that he was aging, ‘Torito’ was determined to squeeze every last drop out of his remaining skills, drive and experience when in November 2002, he attempted to win a world title in a fifth weight class when he challenged WBA World bantamweight champion, Denmark’s Johnny Bredahl. Out-sized and out-boxed over the course of the bout, Gamez lost a competitive yet telling unanimous decision. The writing was on the wall. His career was winding down; very little sand remained in the hourglass.

He dropped three of his last four bouts, one a rematch with former foe Hideki Todaka, the other two, an eliminator for a shot at a title and an opportunity for an interim title, Leo called it quits, walking away from the sport with an illusory yet highly successful career record of 35-12-1 (26 KO).

Some purists would have you believe that the competition from the minimumweight division up through the super flyweight ranks of that period doesn’t compare favorably to today’s welterweight ranks, or the middleweight ranks of our sport’s “Golden Era”. Others would point out the relatively small disparity in poundage between some of the lower weight classes, or that ‘Torito’s’ preferred sanctioning body of choice seemed to be the World Boxing Association, but the fact remains that Leo Gamez managed the unlikely in an outstanding long career that spanned eighteen years.

Leo ‘Torito’ Gamez was a tenacious overachiever of the highest order. He optimized his standing over a long and arduous career path by quietly pursuing his dream in the dank confines of decaying South American and Asian boxing gyms, honing his skills and willing the talent out of his diminutive frame. He didn’t have the supernatural gifts of a prime Muhammad Ali, the God-given natural athleticism of a young Roy Jones JR or the uncanny fighting intuition of Floyd Maywaether JR, but what he did have was good old-fashioned perseverance. That was his greatness. It was his perseverance where I believe that Leo ‘Torito’ Gamez proved his greatness over time; the unwavering desire to win and to achieve beyond reasonable expectation. On that front, there is no doubt that he deserves to be ranked among the elite group that are four-division champs