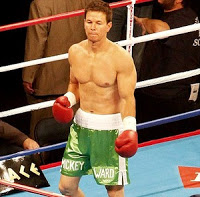 The life story of half-brothers Dickie Eklund and Micky Ward, who hail from Lowell, Mass., is set to hit the silver screen later this year.
The David O. Russell directed film “The Fighter” stars Mark Wahlberg as Ward, Christian Bale as Dickie Eklund and Amy Adams as Ward’s wife, Charlene. The film is already creating some positive buzz in Hollywood among those that have seen the early screenings. It was filmed in and around Lowell in the summer of 2009.“The Fighter” tells the stories of Ward and Eklund, a real life professional boxer who once fought “Sugar” Ray Leonard and then became a boxing trainer after he retired. Eklund’s abuse of drugs and alcohol eventually led to a stint in prison. Upon his release, he helped to guide Ward to a Rocky Balboa-like rise to the top of the boxing world and three legendary fights versus Arturo Gatti.read more