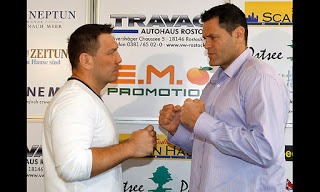 WBA heavyweight champion David Haye will get a look at a possible future title challenger tonight when Australia´s Kali ”Checkmate” Meehan goes toe-to-toe with Uzbekistan´s former WBA champion Ruslan ”White Tyson” Chagaev at the Stadthalle in Rostock, Germany.
The fight is for the WBA´s interim heavyweight title.
40 year old Meehan (35-3, 29 ko´s) is currently the WBA´s no.1 contender, despite being inactive since knocking out Dominique Alexander in two rounds back in August 2008. Fijian born Meehan stands 6’6”, and normally tips the scales around the 235lbs mark. He claims to have stayed in training despite his inactivity, and yesterday appropriately weighted in at an ultra-trim 230 lbs.

31 year old Chagaev (25-1-1, 17 ko´s) is ranked no.2 by the WBA, 5th by the WBO and 7th by the IBF. Chagaev himself has been out of the ring for almost a year, and hasn’t fought since his losing effort against IBF/WBO heavyweight king Vladimir Klitschko last June. In that fight, Chagaev was floored in the second and pulled out after nine rounds. Chagaev entered that fight as the reigning WBA champion, although his title was not on the line. After his defeat the WBA title was declared vacant.
Yesterday the 6’1” Chagaev weighed in at 231 lbs – seven pounds heavier than when he fought Klitschko, although Chagaev was recovering from a bout with hepatitis at that time. He usually fights around the 230 mark.

The bookies have the former WBA champ Chagaev a solid 1/6 favorite, with Meehan back at 7/2 (bet365). But in a weekend of boxing mismatches, this bout has the potential for an upset.

On paper Chagaev certainly deserves to be the favorite; the Uzbek has fought at a higher level than Meehan, and has beaten a better standard of fighter.

After a stellar amateur career that saw him win two world championships and defeat the mighty Cuban Felix Savon among many others, Chagaev made rapid progress in the professional ranks. Initially he was seen as an out-an-out slugger with a high knockout percentage, earning the nickname ”White Tyson.”
As he moved up in class, it was clear that Chagaev was much more than just a puncher; he possessed as good a boxing brain as any top fighter, and was able to change tactics to suit the opponent in front of him.
In 2006 he beat Rob Calloway (KO 2), previously undefeated Vladimir Virchis
(PTS 12), Michael Sprott (TKO 8) and former two-time WBA champ John Ruiz
(PTS 12) in succession.
The following year Chagaev became the first man to beat the 7’2” 320 lb Nicolay Valuev when he outpointed the Russian to win the WBA heavyweight title.

That win remains the standout victory on Chagaev´s slate. In subsequent fights, he looked solid but unspectacular defending his title against Britain´s Matt Skelton
(PTS 12) in January 2008 and Costa Rican Carl Drummond (TD 6) in February 2009.

Chagaev fought bravely in his losing effort against Klitschko, although he was well outclassed. One can only wonder what a healthy Chagaev – one who had fought more than three times in three years – might have accomplished.

Now Chagaev is just one fight away from a matchup with the hottest fighter in the heavyweight division – David Haye – but standing in his way is the enigmatic Kali Meehan.

After a brief amateur career that saw him win 23 out of 28 bouts, Meehan turned pro in New Zealand in 1997.

By the time he challenged Britain´s Danny Williams for the Commonwealth heavyweight title in June 2001, Meehan was 23-0 with 18 ko´s. Despite his impressive record, the standard of Kali´s opposition had been poor, and the once beaten Williams was a massive step up in class. Seconds into the fight, Meehan was floored by a booming right hand. He got to his feet but was badly stunned, and was floored again by another big right. Meehan gamely got back to his feet, but the referee wisely chose to stop the fight. It had lasted just 32 seconds.

A lesser fighter would have struggled to return from such a crushing setback, but Meehan was back in the ring just three months later.
After six victories, Meehan challenged Lamon Brewster for the WBO heavyweight title in Las Vegas in September 2004.

In his previous bout, Brewster had stunned the world of boxing by knocking out Vladimir Klitschko in five rounds. In his next bout after Meehan, Brewster would flatten the hulking Andrew Golota in one round. Brewster was clearly one of the most devastating punchers of the decade, yet Meehan gave him a tremendous fight, only losing on a split decision after twelve exciting rounds.

No sooner had Meehan arrived on the world stage than he suffered a massive setback. Just two months after the Brewster fight, Meehan fought former WBC/IBF heavyweight champion Hasim Rahman in a bout that the WBC, WBA and IBF all recognized as an official eliminator.
The notoriously hot and cold Rahman was red hot that night, bludgeoning Meehan to defeat in four rounds. The Fijian seemed unable to avoid Rahman´s right hand, and from the second round on sustained a severe hammering.

Once again Meehan´s career looked in tatters. His manager, Don King however, kept faith in him, and slowly the Fijian began to once again rebuild his career.

He is currently undefeated in six bouts, the highlight being his sixth round knockout of contender DaVarryl Williamson in October 2007.
If there were any doubts as to Kali Meehan´s punching power – the right hand that finishes Williamson is surely one of the hardest shots featured on YouTube.

Meehan is determined to grab his opportunity against Chagaev, and in a press conference this week said;
”I’ve done the work, all this time I haven’t stopped training. I’m glad I’ve got this opportunity and I want to take it.”

Regarding Chagaev, Meehan said;
”To me, he’s a one-dimensional fighter. He’s got one punch and it’s no secret. I’m not being big-headed or counting my chickens before they hatch but I think he’s overrated. The WBA has looked after him for a long time. The first time he fought someone decent, Klitschko, he got hammered. He quit. He went back into his corner in the ninth round and quit. As far as I’m concerned, I’m fighting a quitter. I just have to take him back to that place in the fight. That’s what I plan to do. I’ve studied this guy and I see a lot of insecurities in him. He doesn’t impress me. I’m trying to not let it go the distance. I don’t want to leave anything to the judges, I want to make their night easy.”

Meehan has sparred more than 70 rounds in preparation for tonight’s fight under the tutelage of Stacey McKinley, one time trainer of Mike Tyson, and claims to be in the best shape of his life. Meehan certainly has a punchers chance. His tactic will surely be to come out throwing big right hands in an effort to blow Chagaev away.

Chagaev is a master of slipping shots and moving inside – hands held high. Meehan has shown a vulnerability to straight right hands in his career, but against the southpaw Chagaev, that wont be an issue.

Chagaev seems to have fallen out of love with boxing. At his peak, he would surely have beaten Meehan convincingly.
But watching him sparring this week, and at yesterday´s weighing in, he looked flat and listless. In comparison, Meehan looked razor sharp and rock hard, and could pass for ten years younger than his 40 years.

Don King was in no doubt about the outcome of tonight’s fight;

”We are coming to shock the world, today Australia, tomorrow the world,” King said. ”Kali Meehan will checkmate Chagaev, he will knock him out. We will let him know that he is not prepared for an Aussie.”

I am going to put my neck on the line and pick Meehan to ”shock the world!”

Meehan by an early knockout.