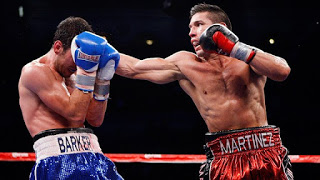 Watching Sergio Martinez labor to a surprisingly difficult 11th round knockout over brave British challenger Darren Barker, the reigning European middleweight champion, at the Boardwalk Hall in Atlantic City on Saturday night, one would have to wonder if the Argentinian maestro’s performance was not part of a cunning plan hatched by his promoter Lou DiBella, his trainer Gabriel Sarmiento and Martinez himself to entice one of the boxing superstars who have thus far avoided any possibility of a matchup with ”Maravilla.”

Despite a bloody nose he picked up in the fourth round, Martinez at times looked lackluster, and rarely moved out of second gear during the fight, and while for several rounds it looked as if Barker might do the unthinkable and cause a stunning upset, the Argentinian in general seemed content to box just as much as he needed in order to pile up points. In the 10th round Martinez opened his shoulders and let several barrages of powerful lefts and rights go, and in the 11th it was just such a volley of shots which finally did for Barker, who’s collapse seemed more down to the accumulation of punches he was being hit with than any one shot in particular. Barker saw his record slip to 23-1 (14 ko’s) while Martinez raised his ledger to 48-2-2 with 27 ko’s. 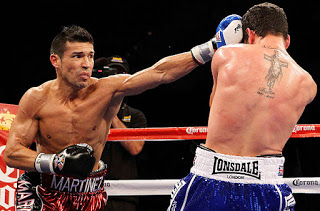 Despite being the heavy underdog, Barker’s strong showing will not be too big a surprise for those who have followed the Londoner’s pro career. At 29 years old, the 6’1″ Barker has boxed in the 160 pound class throughout his seven-year career. He is a two-time European middleweight champion, and a highly capable boxer who has also displayed excellent punching power on occasion. His chin has never been found wanting, and did not let him down at all in his fight with Martinez. Barker proved beyond doubt he deserves to be regarded as one of the top five middleweights in the world today. Based on his performance last night, one would give him an excellent chance of defeating current WBC middleweight champion Julio Cesar Chavez Junior if the two were to meet in the next 6 months.

Martinez was always going to have a dip in form sooner or later. His career has been on an upward surge for years now, and this was the first performance since he became an established world star that could be criticized, even though the cold hard facts are that he was ahead on all three judges scorecards when he knocked out the previously undefeated Barker, the WBC’s third-ranked middleweight contender. If that counts as a dip in form, it is testament to the astonishingly high standards the 36-year-old from Buenos Aires via Oxnard, California has set for himself.

Martinez and his management have gone on record as stating that they have no wish to fight Manny Pacquiao, on the grounds that they believe the Argentinian is much too big for the Filipino, and it would be a mismatch. However, boxing is a business. Money talks and B.S walks. Ultimately, if Pacman wants the fight, it will be made.

One would imagine that Floyd Mayweather in particular would have watched last night’s fight and envisioned a way that he could defeat Martinez. Darren Barker caused Martinez problems because of his tight defense, long reach and boxing ability. Barker’s jab was in Martinez’s face for much of the early rounds and broke up the Argentinian’s rhythm. 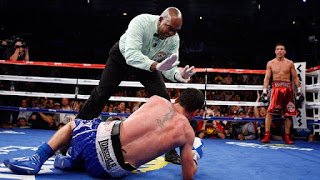 Martinez is a fighter who relies on rhythm more than most, launching his attacks on the balls of his feet, often with his gloves down by his knees, and at the same time avoiding punches with the slightest of head movement. When this rhythm is disturbed, he is not nearly as effective.

While many have been quick to criticize Martinez’s performance, from this writer’s perspective, he defeated a big strong undefeated middleweight contender who came to fight, and possessed all the tools to cause him problems. Barker was only the second genuine middleweight that Martinez had faced, the other being Kelly Pavlik.

After the fight, Martinez and his team were quick to distance themselves from any move up toward super middleweight and light heavyweight. WBC light heavyweight champion Bernard Hopkins had talked about meeting Martinez if he were to successfully defend his title against Chad Dawson next week. Interviewed in the ring immediately after the Barker fight, Martinez told Larry Merchant that he had only weighed 165 lbs prior to the bout, and had no desire to meet Hopkins at a 170 pound catch-weight, as it would be too much of a size difference. 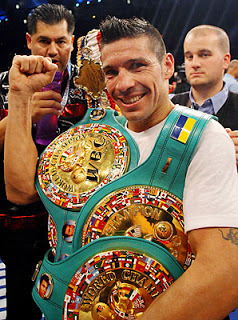 The dream fight for Martinez would of course be an all Latino matchup with Saul Alvarez, but as the Mexican sensation is only 21 years old and under the careful stewardship of the astute Oscar De La Hoya, that fight would look unlikely, at least for a couple of years. By then Martinez would be 38 years old.

For now the obvious matchup would be a catch-weight clash at around 156 lbs with Floyd Mayweather Jr, himself a former WBC 154 lb champion, if the controversial American would A) willing to risk his ”O” against such a tough opponent, and B) willing to negotiate a contract that suited Martinez.

Without doubt, a Mayweather vs Martinez fight for 2012 would be a block-buster event, and one which would quell even the most ardent boxing fan’s hunger – even if just for a while – to see Mayweather v Pacquiao.