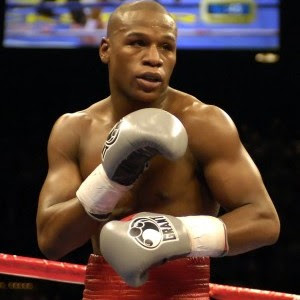 Floyd Mayweather Jnr is not only the best pound-for-pound fighter in the world today – better even than Manny Pacquiao – but he is the greatest boxer ever, greater even than Muhammad Ali and Sugar Ray Robinson.

Who says so?
Why, Floyd Mayweather Jnr himself. That’s who.
Money, not Modesty, is Mayweather’s ring moniker and there is no sign of faux humility when he evaluates his own place in the spectrum of all-time pugilists.
‘Ali was a great fighter,’ he acknowledges, ‘but I’m better. Robinson was a great fighter, but I’m better.’
So much for the two legends who monopolise most of the discussions when connoisseurs of the hardest game wrangle over who is the all-time lord of the ring.

As for Pacquiao, who has supplanted Mayweather in most assessments of the mythical pound-for-pound champion of the moment, apparently he cannot even be certain of a future place in boxing’s Hall of Fame.
Nor, for that matter, can the man he faces in Las Vegas this coming Saturday night.
Sugar Shane Mosley – the interim opponent prior to Mayweather-Pacquiao, if that blockbuster ever happens – is damned thus with faint praise: ‘He’s a solid middleweight.’ read more