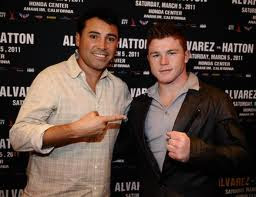 Manchester’s European welterweight champion Matthew Hatton will fight for the vacant WBC world light-middleweight title when he meets undefeated Mexican sensation Saul Alvarez at the Honda Center in Anaheim, California on March 5th.
WBC officials have confirmed that the winner of the bout will inherit the title that was vacated by Manny Pacquiao last month.

Pacquiao won the title, originally vacated by Sergio Martinez after he defeated Kelly Pavlik for the world middleweight title last April, by scoring a twelve round decision over Mexico’s Antonio Margarito at the Cowboys Stadium in Arlington, Texas last November. Despite the one-sided scoreline, the Filipino absorbed considerable punishment from the much bigger Margarito.

In December WBC president Jose Sulaiman approached Pacquiao regarding his intentions regarding defending his new 154 lb crown. Pacquiao and his manager Bob arum responded soon after when they announced that the Filipino’s next fight would be a defence of his WBO welterweight title against Shane Mosley at the MGM Grand in Las Vegas on May 7th.

Subsequently, Pacquiao’s adviser Michael Koncz announced in a statement: ”We learned from experience in the Margarito fight that giving away 10 to 15 pounds during fight night is very detrimental to the safety of Manny. Because of those basic concerns we have no intention for Manny to fight at 154. From this day forward the maximum weight would be 147 lb.”

With that the WBC super welterweight title became vacant. It’s top two contenders were Saul Alvarez and another Mexican, Alfredo Angulo. Alvarez was already contracted to a fight with Hatton. Although Hatton (41-4-2, 16 ko’s) is unrated by the WBC at 154 lbs, he is a solid no.5 at welterweight. It seemed logical to elevate the Hatton v Alvarez bout to the level of a WBC title fight, with Angulo assuming the position of top contender.
Naturally, 29 year old Matthew, the younger brother of three-time world champion Ricky Hatton, was ecstatic at the news.

“I have been waiting my entire career to fight for a world title and I can’t put into words how excited I am. I was already really motivated for this fight and this just adds to it. I am ready to bring the belt back with me to Manchester.”