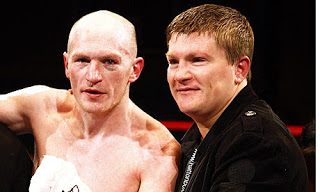 Manchester´s Matthew Hatton emerged from the shadows of his illustrious brother to thrash former two-time European champion Gianluca Branco and lift the European welterweight title at the Goresbrook Leisure Center in Dagenham, Essex, last night.
The fight was promoted by Matthew´s older brother Ricky, who was ecstatic with the younger Hatton´s success.
Ricky said: “I’m so, so proud of him. I know he wanted to chuck the towel in a few years ago but I told him to stick at it. He’s a late bloomer.”
28 year old Hatton (39-3, 15 ko´s) dominated 39 year old Branco (43-3-1, 22 ko´s), who had lost just twice before in a fifteen year career, to Arturo Gatti and Miguel Cotto in world title challenges. Only in the first and eleventh rounds did the Italian look dangerous. Hatton boxed beautifully behind a fast left jab. His combination punching was sharp, and when Branco did get through Hatton´s defense, his chin was sound.
Hatton was ranked 15th by the WBA prior to this fight. The win will elevate him toward or even into the top-ten. The obvious fight now would be a domestic matchup between Hatton and British welterweight champion Kell Brook that would pack Manchester´s M.E.N Arena. Brook is marking time, waiting for an opportunity at world level, and would relish the opportunity to add the European title to his C.V.
If big brother Ricky, and his former promoter Frank Warren can bury their differences and work together, Mathew Hatton v Kell Brook could happen within the next three months.