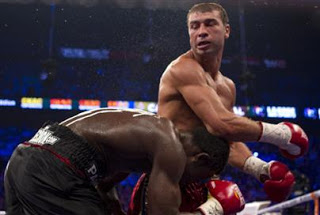 Canadian based Romanian Lucian Bute, the IBF super middleweight champion showed just why many experts rate him the best super middleweight in the world on Saturday when he knocked out Colombian Edison Miranda with a vicious left uppercut in the third round before 13,682 fans at the Bell Centre in Montreal, Canada.

30 year old Bute (26-0, 21 ko´s), making the fifth defense of the title he won with an eleventh round knockout of Alejandro Berrio in October 2007, began the bout cautiously, and there was little between them in the first two rounds. However in the third, 29 year old Miranda (33-5, 29 ko´s) began the round more aggressively, and at one point pounded his chest, inviting Bute to hit him. The Romanian duly obliged, flooring Miranda with a huge left uppercut. The Colombian was up at nine, but clearly in no state to continue, and referee Ernie Sharif correctly waved the bout off.

After the fight, Bute´s trainer Stéphan Larouche said;
“I told Lucian one day that he would get the orgasm of boxing – that is, a knockout by an uppercut. That’s the best knockout there is.”
A happy Bute played down Larouche´s comment, saying;
“I can’t say I knew I was going to knock him out, but I saw in his eyes that he was worried. He made it look like I didn’t hurt him. So I thought, okay, now you’ll see. I’m very happy with my performance. It (the uppercut) was a good feeling. I’ll leave it at that.”
In his previous fight last November, Bute knocked out the hard-as-nails Mexican Librado Andrade in four rounds – the same Andrade that a peak Mikkel Kessler couldn’t budge over twelve rounds in 2007 – the same Mikkel Kessler who will start as 8/13 favorite to take Nottingham´s Carl Froch´s WBC super middleweight crown from him when the two meet this Saturday at the MCH Messecenter Herning at Herning in Denmark.
Froch v Kessler is the latest chapter in Showtime TV´s Super Six World Boxing Classic; a six man tournament to find the best super middleweight on the planet. Just why Bute wasn’t part of the lineup isn’t clear. One report states he was unhappy about fighting outside of Canada, another claims he was unhappy about the amount of money he was offered.
Whatever the reason, its tough to argue against Bute being the best super middleweight in the world right now. At 6’2”, he is huge at the weight. He is a skillful southpaw, patient and clinical, with genuine one punch knockout power. In his last two outings, he stopped Andrade with a single left hook to the body, and now he has flattened Miranda with a single left uppercut to the jaw.
In this writers opinion, the one boxer Bute might have trouble with would be the undefeated American WBA super middleweight champion Andre Ward, who fights fellow American Allan Green on June 20th , a bout that is also part of the World Boxing Classic series.
Completing the Super Six line up are American Andre Dirrell and Armenian Arthur Abraham. Last month in Detroit, Dirrell defeated Abraham on an 11th round disqualification.
Big Fight Odds; Carl Froch 6/5, Mikkel Kessler 8/13
Andre Ward 1/6 Allan Green 4/1 bet365