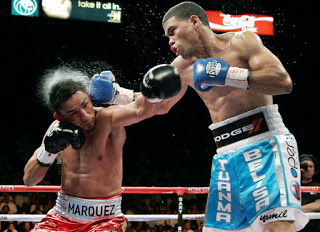 Marquez (39-6, 35 KOs), of Mexico, was unable to come out for the ninth round after unofficially losing seven of the eight rounds to Lopez (29-0, 26 KOs), of Puerto Rico, during a bout scheduled for 12 rounds.
Marquez, who had to postpone this bout once, said he wanted to fight despite a right shoulder injury he suffered before the contest. He injured that shoulder once again in the third round when Lopez responded to Marquez’s aggressive entrance to the round with two strong flurry of punches. It was during one of those flurries when he injured his shoulder.more