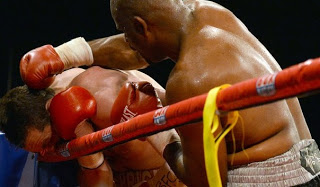 American
veteran Tony “The Tiger” Thompson just cannot follow the script. Last February
he was brought over to the UK to be a decent test for rising KO artist David
Price.

But he had
looked a shot fighter in his 2012 rematch with Klitschko, going down in six
rounds. He looked old. He looked slow. He looked ready to be taken out
spectacularly, and David Price was just the man to do it. Hadn’t Price ripped
through Tom Dallas, John McDermott, Sam Sexton, Audley Harrison and Matt
Skelton in a total of ten rounds, felling them all with his howitzer-like right?
Price was world ranked, and if he blew Thompson away impressively, his next
fight could be against a Klitschko for a world title.
The script
was written, the stage was set – everyone knew their part. And then Tony
Thompson decided to tear up his script and improvise, kayoing Price in the
second round with a looping shot that blew out his eardrum and left him doing
an impersonation of a limbo dancer.
It was a
shocking result, and one that ricocheted through British boxing like Oswald´s
magic bullet. The excuses were being made for Price almost before he´d reached
his dressing room.
“It can
happen to anyone.” said one ex-fighter, “It´s just one of those things, a lucky
punch” said a TV pundit. Of course, we all kind of knew that we had never seen
a major fighter KO´d by a blow behind the ear before, but we wanted to give Big
Dave the benefit of the doubt because A) his one-punch KO power was genuinely
exciting and B) he was a thoroughly likeable guy.
Although it
made very little sense, the rematch was made. Obviously Price wanted revenge.
As a fighter, that was his most basic emotion – redemption, and as soon as
possible. But that is exactly where good management is supposed to step in and
save the fighter from himself.
Amir Khan
was desperate to get Breidis Prescott straight back in the ring after suffering
a one-round blow out against the Colombian earlier in his career. Had he been granted
his wish, would he have become a multi-million multi-world champion? Maybe, but
probably not.
Luckily for
him, Frank Warren was strong enough a personality to steer him in a different
direction, so it became a moot point. Instead Khan teamed up with Freddie Roach
and found his redemption in a different way.
In
hindsight, Price should have taken the Amir Khan route, and Frank Maloney
should have been strong enough to save the fighter from himself.
In Saturday
night´s rematch at the Echo Arena in Liverpool, Price looked exactly the same
in the first round. The same nerves as five months earlier, the same stiffness,
the same awkwardness. And the same complete lack of any kind of left jab. Franny
Smith was still in Price´s corner, but Lennox Lewis had apparently been aiding
him in his training camp. You never would have known though.
As for
Thompson, despite looking a little trimmer, he looked strangely subdued and flat
in the first round, and in truth never once threw a punch with genuine KO power
all night.
The second was
a carbon-copy of the first, until late in the round when the reverse of the
first fight happened. Price caught Thompson with a solid blow high on the head
and the American went down hard. He was up at nine, and just for second it
looked as if the referee was considering stopping it. He didn’t, and Thompson
survived the round.
In the
third, Price teed off with right hand haymakers at every opportunity, and
Thompson was tagged and wobbled several times. The momentum was at that point
firmly with the Big Scouser. But even then, it was clear that Thompson´s head
was clearing, and he was taking Price into dangerous ground.
The fourth
saw the momentum slip decisively into the American´s hands, and not from the
power of his punching or the quality of his boxing. Thompson was throwing
punches and getting through, but they were hardly Forman-esque in their power.
The truth was Price was running out of gas right in front of our eyes. A late-round
body shot from Thompson sent Price heading back to his corner gasping for air.
In his
corner Franny Smith implored Price to “get his legs under him.” If that was
meant to instruct him to get on his toes and dance, it was tantamount to
telling Paulie Mallignaggi to “knock this guy spark out”, in other words, it
was an impossibility. Price did not have the energy to dance. What he should
have done was stand flat footed in the center of the ring and slug.
In the
fifth, Thompson patiently stalked Price around the ring. Every combination he
threw had Price reeling. Finally, trapped in a corner with Thompson reigning
blows on his, Price tried to turn his back on his opponent. The referee jumped
in and gave Price a standing count, and then decided, quite rightly, to end the
contest. 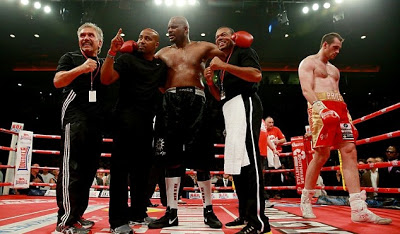 Thompson
(38-3, 26 KOs) and his corner were understandably ecstatic and celebrated in
the ring. Price (15-2, 13 KOs) looked shell-shocked. Later, in an interview
with BoxNation, Price´s promoter Frank Maloney spoke about leaving boxing, and
then began weeping. Maloney has always gone the extra yard for his fighters,
and feels their pain far more than most in his industry. 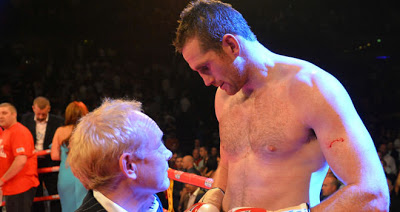 It is far
too early to comment on David Price´s future, whether it be in terms of how he
can salvage his career, or to write his boxing obituary. Fighters have come
back from hopeless situations to achieve great things in the ring. The current
no.1 heavyweight in the world, Wladimir Klitschko, has himself been stopped three
times – twice inside a year – yet had the determination and desire to overcome
those setbacks and prosper.
The
question David Price must ask himself in the next few days is a simple one: how
much does he really want it?