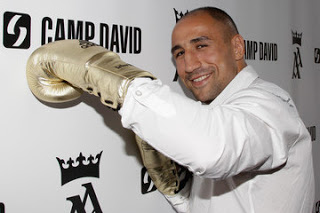 Until recently he was one of the most feared fighters on the planet, but now former IBF middleweight champion and Super Six semi-finalist Arthur Abraham looks to rebuild his shattered confidence with a fight against Croatia’s Stjepan Bozic this Saturday night at RWE Rhein-Ruhr Sporthalle in Mulheim an der Ruhr, Germany.

King Arthur’s crown of invincibility was knocked sideways when Andre Dirrell dominated him for ten rounds, and then knocked clean off his head when Britain’s Carl Froch won every round of their fight for the vacant WBC super middleweight title last January.

As a middleweight he made ten defenses of his IBF title, bludgeoning six of those to defeat inside the distance, and even managed to outpoint one rival, Edison Miranda, while suffering a broken jaw.

When making the 160 lb limit and the big bucks on offer from Showtime TV became too hard to ignore, Abraham moved up to the super middleweight division, entered the Super Six World Boxing Classic and immediately made an impact.
On the night Carl Froch struggled to a home town decision over American Andre Dirrell in Nottingham, Abraham looked awesome as he scored a crushing final round knockout over former undisputed middleweight champion Jermain Taylor in his adopted hometown of Berlin.

Abraham immediately became the favorite to win the Super Six, a tournament developed by American TV giants Showtime to find the best fighter in the highly competitive super middleweight division. He was the only fighter during the first round of fights to score a knockout, and as a KO was worth two points compared to one point for a decision, he led the field after the first round of results.

Then something unexpected happened. In Abraham’s second Super Six outing against the Andre Dirrell in Detroit last March, it was the the young American who dominated the fight from the opening bell, drilling the Armenian with fast jabs and hard straight rights, constantly moving and utilizing his 6′ 2” frame to perfection.

Abraham, we discovered, had no plan-B in his reserve. He kept relentlessly moving forward tank-like, guard held high, looking for the opportunity to land his heavy artillery, while Dirrell put on a masterclass in the art of boxing.

After ten rounds Abraham was so far behind on points he needed a knockout to win.
Early in the eleventh round, Dirrell slipped on a wet patch in his corner of the ring and went down on his haunches. Abraham was on him in a flash and took the opportunity to direct a mighty wallop to the side of Dirrell’s head, appearing to render the American unconscious and earning himself an automatic disqualification.

Because Abraham’s first career defeat had been on a DQ rather than a one-sided points decision, much of his aura remained intact. ”He was finishing strongly” we told ourselves. ”Look what he did to Taylor in the twelfth round. He could have done the same to Dirrell.”
Some hardcore Abraham fans claimed Dirrell had made a meal of the blow to the head, claiming he had feigned being knocked unconscious to get Abraham disqualified. Dirrell’s subsequent neurological issues resulting in his withdrawal from Super Six dismissed any doubt as to the severity of the damage Abraham’s blow had done.

When it was announced that next up for Abraham would be Carl Froch, many fans believed if ever there was an opponent who was tailor made for the Armenian, it was Nottingham’s former WBC champion.
Froch had lost his second Super Six bout and with it his beloved WBC super middleweight belt to Dane Mikkel Kessler in a thrilling fight in Herning, Denmark.

Like Abraham, the Englishman is a true warrior who loves nothing more than what Brits call a ”tear up.” Froch frequently fell into the alarming habit of keeping his left hand very low and almost inviting opponents to hit him on the chin. As a fight would progress he would drop both hands low a la Vitali Klitschko and attempt to ride punches that came his way rather than block them, despite the furious efforts of his long suffering, long time trainer Robert McCracken.

Surely Froch’s streak of recklessness would be suicidal against a proven puncher like Abraham, thought the majority of boxing scribes. The bookies certainly thought so, and made the Armenian a clear favorite. This writer agreed, and saw a win for King Arthur inside five rounds.

What came to pass that cold night in the Hartwall Arena in Helsinki, Finland, will go down in British boxing folklore as one of the greatest ever performances by a UK boxer against a favored foreign fighter, like John H. Stracey’s 6th round TKO of Jose Napoles in Mexico City in 1975, Lloyd Honeyghan’s 6th round retirement over Don Curry in Atlantic City 1986, Lennox Lewis’s second round knockout of Razor Ruddock at Earls Court in 1992, and Joe Calzaghe’s jaw-dropping display of boxing skill v Jeff ”Left Hook” Lacey at the M.E.N Arena in 2006.

Froch’s performance was the equal of Calzaghe’s but where Joe had always boxed as he had the night he met Lacey, though not quite at that level, most of us had never seen Carl Froch box as he did against Abraham, nor thought he was capable of it. From the opening bell, Froch’s jab was in Abraham’s face, his defence was tight and his footwork excellent.

It was as if he had used Andre Dirrell’s performance as a blueprint, and then improved on it. As in the fight with Dirrell, Abraham showed once again that when an opponent caused him problems and broke up his game plan, he had no plan-B.
For round-after-round, Abraham trundled forward as Froch drilled him with jabs, crosses, hooks and scything body shots. Often Abraham could do nothing more than hold his guard up and attempt to block shots, such was the sheer volume of leather that was being thrown his way.

For once Froch followed McCracken’s instructions to a tee, except for a brief moment at the start of the twelfth when he attempted to trade blows with Abraham and was promptly caught by the best punch of the fight, a booming overhand right that sent alarm bells ringing amongst watching British fans. However Froch quickly regrouped before Abraham could capitalize on his window of opportunity, and saw out the round in dominant fashion to win by a shutout on two of the three ringside judges scorecards.

The result sent shock-waves throughout the boxing world, particularly in Germany where boxing is booming and Abraham is on par with the Klitschko brothers as the biggest box-office draw. Amazingly, and despite losing two out of three Super Six fights, the two points he gained from knocking out Jermain Taylor ensured that Abraham would still make the semifinals, where he will take on the undefeated WBA champion, America’s Andre Ward.

With his confidence at an all time low, so much so that his coach Ulle Wegner recommended he see a psychologist, 30 year old Abraham (31-2, 25 ko’s) has decided that before he tackles Ward, he needs to get back into the WIN column, hence his fight this Saturday night aginst the WBA’s 9th ranked super middleweight, Stjepan Bozic.

Born in Slovenia 36 years ago but now based in Croatia, Stjepan Bozic (24-4, 15 ko’s) turned pro in 2000 after a sterling amateur career that saw him take a silver medal in the middleweight class at the 2000 European Championships, where he defeated Carl Froch in the quarterfinals.

For the first five years of his pro career he boxed extensively in France, before relocating to Croatia. In December 2005 Bozic scored a points win over formet two time WBA light middleweight champion and one-tiome conqueror of Winky Wright, Miguel Angle Vasquez for something called the World Boxing Foundation super middleweight title.

By now Bozic was an impressive 18-1 with 11 stoppages, but back to back defeats in 2006 where to derail his progress. Germany is the Mecca of boxing for many fighters these days, especially those from Eastern Europe, so it was doubly disapointing when Bozic dropped a split decision to future European super middleweight champion David Gogiya of Georgia on his German debut. Six months later Bozic was stunned in just two rounds by former European champion Vitaliy Tsypko of the Ukraine, with Bozic hitting the deck twice in the second round.

After back-to-back defeats in Germany, Bozic returned to Croatia to rebuild his career, scoring five consecutive wins, and picking up the WBA Inter-Continental title along the way. In November 2009 Bozic was back on German soil once again, facing Dimitri Sartison of Kazakhstan for the vacant WBA world super middleweight title.

Bozic was up against it early on against the heavy-handed Sartison, contending not only with the Kazakh’s punching power, but with his liberal head use. Twice in the second round Bozic visibly cringed after being hit, and the second time he was actually staggered, yet the referee did nothing. Despite an injury to the left eye that was to worsen rapidly during the fight, Bozic boxed gamely, matching Sartison on skill but clearly out-gunned. After six rounds, Bozic’s left eye was looking truly horrific, reminiscent of Antonio Margarito’s broken eye socket courtesy of Manny Pacquiao, and the referee stopped the fight on the advice of the ringside doctor.

Last April Bozic returned to action with a second round TKO over Hungarian journeyman Gyula Gaspar, his most recent outing. Affable, intellingent and fluent in English, Bozic is a smart boxer with decent power. He is a brave fighter who takes a good shot and is willing to trade – qualities that don’t bode well for his health against Abraham on Saturday.

The best case scenario for Bozic would be to take advantage of an Abraham still in a post-Carl Froch depression with – according to Ulli Wegner – psychological issues, and for the Croatian to box out of his skin and score an upset decision.

The more likely outcome is for Bozic to extend Abraham into the latter rounds and to put a strong performance in the biggest fight of his life before the Armenian catches up with him around the eighth round with his patented howitzers, when either the referee will stop the fight or Bozic’s corner will pull him out.

Abraham by stoppage in eight.