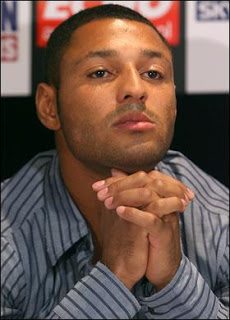 Sheffield´s outrageously talented British welterweight champion Kell Brook makes his first appearance of 2010 when he takes on Poland´s Krzysztof Bienias in a WBO world title eliminator on the Paul Smith v Tony Dodson bill at the Echo Arena in Merseyside this Friday night.

Last October this writer pondered the question ”Could Kell Brook be the best boxer in Britain?”
Brook was scheduled to fight former British champion and world title contender Michael Jennings, and he had just picked up the Young Boxer of the Year award for 2008. A subsequent viral infection put paid to his fight with Jennings, and he has not fought since his three round knockout over Michael Lomax last July.
This writer still believes Brook is the best boxer in Britain, but after eight months out of the ring, Brook has almost become a forgotten man, and he badly needs to make an explosive return.

His contemporaries, lightweight Kevin Mitchell and light heavyweight Nathan Cleverly have posted stunning victories and seen their respective stocks rise dramatically during the past eight months; Mitchell is ranked no.1 at lightweight by the WBO and set to fight Aussie Michael Katsidis for the WBO title this summer. Cleverly is ranked 2nd by the WBO, 4th by the WBC and potentially no.1 by the IBF at light heavyweight. If Frank Warren thinks he´s ready for it, he too could fight for a world title this year.
Brook´s is ranked 6th by the Brit friendly WBO, and he is unrated by the other world boxing bodies. Are Brook´s trainer and manager Brendan Ingle and his promoter Frank Warren being overly cautious with the 23 year old? In his 20 paid fights,
(13 ko´s) Brook is yet to face a genuine world class contender.

There´s no doubt about it; the upper echelon of the welterweight division is a scary place right now, with names like Pacquiao, Mosley, Mayweather and Berto, staring down. Then there are the welterweight division´s ”usual suspects”; Clottey, Judah, Cotto, Collazo, maybe even Margarito, all tough welterweights, all outstanding fighters in their own right, but a league below the big four.
And then there is the mixture of young hotshots like 19 year old Saul Alvarez plus veteran´s like former junior-welterweight champion´s like Junior Witter and Jose Luis Castillo, both 36, moving up to welterweight for one last throw of the dice.

The big four aside; a well prepared Kell Brook could hold his own with any of the fighters mentioned above – right now. And when he starts knocking over world ranked contenders the way he has British title challengers, the big four wont seem quite so scary.

Kell himself has targeted Miguel Cotto as the big name fighter he would like to tackle.

”Cotto would be a great fight for me. I´d be out for a bit of revenge for the UK after he beat Jennings last year.” Brook said in a recent interview.
”He´s a great fighter and definitely world class, but he might have had his time. I can see a scenario where Pacquiao gives up the title, and maybe me and Cotto get it on for the vacant belt. If that´s the case then bring it on. I grew up in an era where Ricky Hatton was constantly chasing a fight with Kostya Tyszu. Watching him made me realize you have to be patient and make sure you pick your moment, but I´m growing in confidence with every fight.”

Brook will find that Cotto is unavailable in the immediate future: the Puerto Rican is contracted to meet Israeli-American Yuri Foreman for the WBA super-welterweight title at Yankee Stadium in New York on June 5th. In the meantime, there is the little matter of Krzysztof Bienias for Brook to take care of.

The 30 year old from Warsaw is currently ranked two places above Brook in the latest WBO rankings, and is the holder of the WBO´s intercontinental title, a belt he will defend on Friday night.
Bienias (39-3, 16 ko´s) is undefeated for more than five years, and is on a 17 bout winning streak that began after he sustained a two round cut eye defeat against Junior Witter for the European light-welterweight title in November 2004.
After losing a 4 round decision on his pro debut in September 2000, Bienias scored 18 consecutive wins against moderate opposition in Poland, although he did score a points win over Russian Yuri Romanov, a future European lightweight champion in 2002.
Bienias took a huge step up in class when he fought the tough German Oktay Urkal for the European light-welterweight title in November 2003 in Germany, and although Bienias was soundly outpointed, there was no disgrace in losing to a great fighter like Urkal.
One year later, and Bienias again challenged for the European crown, this time against a red hot Junior Witter at Wembley.
Before Witter challenged Zab Judah for the IBF light-welterweight title in 2000, he had scored just three stoppage wins in 17 fights. After losing on points to Judah, the psychological shackles that had curtailed his power came off and Witter went on a knockout streak that had hit 14 by the time he faced Bienias. Witter was supremely confident that night, his boxing was surgically precise, and he punched with menacing authority. In the first round a bad cut opened over the left eye of Bienias, and by the second his face was a bloody mess. Witter couldn’t miss him, and the Pole could barely see Witter. The referee had no option but to stop the fight, but in retrospect he probably did Bienias a favor; Witter looked awesome that night, as good as he has ever looked, and there was only going to be one winner.

Bienias returned to Poland to embark on his current unbeaten run. Impressive as it is, the only name of any note on this streak is the one time Italian prospect Sven Paris who Bienias stopped twice in Italy in 2009. A technically sound straight-up boxer with a high guard and a solid left jab, Bienias´ best hope would seem to be to get into a rhythm and keep Brook at a distance.

Kell Brook is that rarest of creatures; a fighter who possesses silky boxing skills, yet hits devastatingly hard. His one round demolition of Kevin McIntyre in November 2008 remains the most impressive domestic title performance I have ever seen.

Like his boxing idol, Prince Naseem Hamed, Brook can end a fight with one shot at any time. He oozes confidence and charisma, and has all the potential to be a boxing superstar. And he will be paying special attention to a certain boxing superstar taking to the ring in Las Vegas this Saturday night;

“After I’ve knocked out Bienias I’ll sit down in front of the television and watch the Pacquiao fight,” said Brook. ”If I hadn’t been fighting on Friday I might have gone to the States to be ringside. Manny is the man to beat at the moment, and it’s either him or Mayweather who is the pound-for-pound number one. Pacquiao’s not unbeatable, he’s has been beaten before, it will take a special fighter to beat him right now.
Obviously I need more fights before I face him, but if the fight did happen, I’d be excited at the opportunity rather than worried about the result.”

Brook is destined to become one of the very best fighters in the welterweight division, and Bienias, despite his lofty world ranking, is not going to derail him.

Brook to win by a knockout inside three rounds.