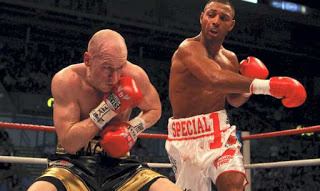 Sheffield’s Kell Brook look sensational for six rounds and less so for the remainder of the contest as he won a one-sided twelve round decision over Manchester’s Matthew Hatton at the Motorpoint Arena in his hometown on Saturday night.
The victory sets him up for a possible world title fight later this year.

Brook won by scores of 117-111 and 118-109 twice. Hatton was on the canvas in the 9th, although replays showed more from being off balance than a Brook punch.

Brook looked edgy as he entered the ring in front of 10,000 fans, but soon took control of the action, dominating with his fast, powerful jab, a punch that would give Hatton problems all night. Brook held the center of the ring and drew blood from Hatton’s nose. It was more of the same in the rest of the early rounds, while in the fifth Brook opened up and had Hatton in serious trouble. ‘Special K’ has the ability to throw power punches from a variety of angles, and Hatton had no option but to cover up and hang on till the bell. The sixth was even worse for Hatton, and at that stage it looked as if the writing was on the wall, and the referee would be forced to stop the fight sooner rather than later.

Hatton however came bustling back in the seventh and proved he was still very much in the fight, and from that point on, he was never again in serious trouble. He was down in the ninth, and although it looked spectacular, it was more the result of him missing a big shot and being off balance than a Brook punch, but it was ruled a knockdown. Ironically, Hatton came back and landed his best punch of the fight in the tenth – a hard left hook to the head that stunned Brook.

Brook was guilty of sloppiness in the final two rounds of the fight, and repeatedly smothered his own work. Had Hatton been a heavier hitter, it could have been interesting, but the Manchester man could do little more than clinch by this stage. It was no surprise that Hatton survived the last two rounds and went the distance, and although Brook tried to score a late stoppage, he looked resigned to getting the points win – which he duly did.

Afterward, Brook stated the obvious, telling Sky Sports: “I enjoyed it. It was a spectacular night, now we are going on to bigger and better things as there is no-one to touch me in Britain.”

Special-K, who raised his record to 27-0 with 18 KOs, needs to work on his late-fight fitness and concentration. Everything else is already in place. As for Hatton (now 42-6-2 with 16 KOs), he proved once again that he is one of the toughest men in the division, and he can still make good money at domestic and European level, though he may not get another crack at a world crown.

For six rounds Brook looked the heir-apparent to Pacquiao and Mayweather, but toward the end he looked like he would struggle even against the likes of a Victor Ortiz. If he can rectify those issues, he holds the keys to the welterweight division.