Home Archive Kell Brook calls out Amir Khan!: ”I would knock him clean out!” 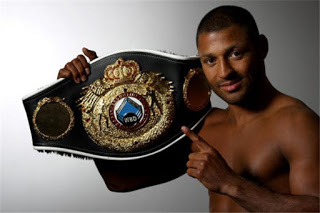 The UK’s no.1 welterweight star Kell Brook has challenged Amir Khan to take him on in an all-British showdown in Manchester in just two months time.

Bolton’s WBA junior welterweight champion Khan has not yet named an opponent for his April 16th date at Manchester’s MEN Arena with names like Northern Ireland’s European champion Paul McCloskey and former WBC world champ Junior Witter being mentioned. Now Brook, who is managed by Khan’s former promoter Frank Warren, has thrown his name into the hat.

Californian Timothy Bradley defeated fellow American Devon Alexander in Detroit on Saturday night to add the WBC light welterweight title to his own WBO crown, and a Khan v Bradley unification fight is a virtual given for the summer. 24 year old Khan (24-1, 17 ko’s) has made it clear he intends to move up a division to welterweight by 2012 and has targeted a fight with Floyd Mayweather at 147 lbs.

Sheffield sensation Brook (23-0, 16 ko’s), also aged 24, is currently ranked no.1 in the world at welterweight by the WBO, making him Manny Pacquiao’s mandatory challenger.

If a Khan v Brook fight were to go ahead it would likely be made at a catch-weight of around 145 lbs, which would mean Khan’s WBA light welter title would not be on the line. Brook has never boxed at junior welterweight and has actually fought several times at junior middleweight. Khan has yet to fight at welterweight.

In this writers opinion the logical move for both Brook and Frank Warren would be to wait for Khan to step up to welterweight next year, and for there to be at least one world title involved.

Manny Pacquiao is the scourge of the welterweight division at the moment, but is also the WBC light middleweight champion. Pacquiao has a WBO title defence against Shane Mosley scheduled for May 7th, and after that there is speculation that he may move back to 154 lbs for a rematch with WBA light middleweight champion Miguel Cotto. If that were to happen the WBO welterweight title could become vacant, leaving Brook in pole position to become world champion. If both Brook and Khan were to win welterweight titles, a unification clash between the two would be a genuine block-buster in every scene.

Nevertheless Brook, and Warren, who managed Khan until early 2010 when Khan chose instead to sign with Oscar De La Hoya’s Golden Boy Promotions, are still adamant that now is the ideal time for the fight to happen. Brook was quoted earlier this week as saying;

“Come on Khan stop messing about and give the fans and media a real fight that they want to see – against me.” said Brook. ”If he’s talking big about fighting Mayweather then why is he overlooking the best welterweight in Britain first? I’m fit and ready to go. My promoter Frank Warren wants the fight – the only person who doesn’t want it is Khan.”

Brook continued: ”I would knock him clean out, he might have hand speed but I’m just as fast and I carry three-times the power that he does. Khan reckons that he did me in sparring years ago, so now he can try and do it for real.”

Warren himself said: “If he wants Kell Brook, then we can make it easily. It’s a fight that the British public would love, and unlike some of the opponents that I’ve heard being mentioned in the last few weeks, Brook is a legitimate contender. He’s unbeaten, he’s number one in the WBO rankings at welterweight and he’s very hungry.”