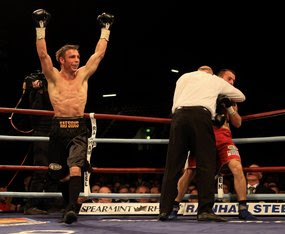 The Australian, who has been in with some of the biggest names in the lightweight division, returns Down Under with the WBO belt under his arm after inflicting the pride of Dagenham’s first career loss.

The likeable Katsidis came with the reputation of a hard-hitting warrior but allowed a tense-looking Mitchell to dictate the early pace behind a long left jab, although the Aussie unloaded impressively in the early clinches.

The Briton probably won the first two rounds as he successfully kept his opponent at a distance, looking sharp as he caught him with swift combinations.

It was looking promising for Mitchell but it all changed early in the third session when he was caught on the temple by a big left hook that had him staggering into the ropes. read more