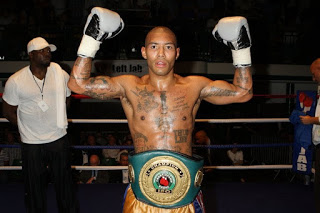 Morden’s British light-welterweight champion ”Lightning” Lenny Daws can claim outright ownership of a Lonsdale belt and improve on his European and world title aspirations when he makes the third defence of his British light welterweight title against Kilburn’s Ashley Theophane on Mick Hennessy’s exciting bill at London’s Wembley Arena on Saturday night.
The all London clash between Daws and Theophane is part of an impressive line up that includes British boxing stars such as John O’Donnell, Craig Watson, Lee Purdy and Tyson Fury. The card is being screened live on Premier Sports (Sky channel 433), and is hosted by the legendary Steve Bunce. The action starts at 8pm.

32 year old Daws (21-1-2, 9 ko´s), is currently ranked no.1 contender by the EBU (European Boxing Union) for champion Paul McCloskey’s crown. The Derry fighter may be somewhat distracted by his up-coming world title fight with WBA light welterweight champion Amir Khan on April 16th, so if Daws were to win on Saturday he could soon find himself matched with Italian veteran Giuseppe Lauri for the vacant title. Daws would be the bookies favorite to defeat Lauri, and a European title would virtually guarantee him a world ranking in the ultra-competitive light welterweight division.

The 2002 ABA light welterweight champion, Daws turned professional the following year and after twelve straight wins, defeated the more experienced Colin Lynes via a ninth round TKO in a British light welterweight title eliminator. In April 2006, Daws became British champion when he outpointed the highly capable Nigel Wright for the vacant crown.
Daws first reign as British champion was to be short lived; he lost his title just seven months after winning it in his first defence against Scotland’s Barry Morrison via a split decision in a savage encounter. Daws misfortune continued later that year when he could only draw with former victim Nigel Wright over ten rounds.

Daws kick-started his comeback in early 2008, and after four straight wins, met Morrison in a rematch in September 2009 for the vacant British light welterweight title. The Scot had lost twice in British title fights since their first fight, and Daws made sure it was a hat-trick, knocking out Morrison in the tenth round of another thriller to become British champion for the second time.

In his first defence, Daws was given a surprisingly torrid time by comebacking Welsh slugger Jason Cook. 34 year old Cook, a former European lightweight champion who had retired in 2005 and had only returned to action in 2009, rocked Daws repeatedly early in the fight with his trademark left hook, and stayed competitive throughout the contest, holding the champion to a draw. It was a thrilling encounter that was screened live on Sky TV. Daws had had a lucky escape, and he knew it.

Five months later Daws retained his title for a second time, stopping previously unbeaten Steve Williams in ten rounds when his corner pulled him out due to cuts to his right eye. Again it had been a tough fight, and once again it was Daws’s sheer guts, fitness and determination that had seen him through.
A well schooled boxing technician in the classic British mold, Daws’s work ethic is second to none. He sets a ferocious pace in the ring, throwing barrages of punches from behind a high defense, and will stay at that pace all night. Tough and durable, the only knock against Daws is his lack of genuine power, with just nine early endings from his 24 fights. His chin got him through his fight with the big hitting Cook, but at times the Welshman looked exhausted, and Daws should have taken him out. One can only wonder how much further Lenny may have gone already had he possessed a big punch.
At a pre-fight press conference earlier this week, the mild mannered Daws was confident of the outcome of Saturday’s fight, and what it may lead to.
“Training’s gone really well and everything has been spot on. To be honest, things couldn’t have gone better. It’s going to be an interesting fight as Theophane’s experienced, and has mixed at a high level. But as I get into a rhythm and put him under pressure, I think my workrate will lead to a late stoppage or points victory. I’ve never boxed at Wembley Arena so it will be a nice experience to fight in a bigger venue. It’s close to his home in Kilburn but it’s not going to affect me as I’ll have quite a crowd there too. It’s always been a dream for me to win a Lonsdale belt outright and I’m just one victory away now. It will be a great atmosphere and I’m looking forward to taking home that title for good.”

Daws continued:
“I think I can mix it with anyone but I’d rather do things the right way. I want to win the European title and defend it a few times before hopefully landing a bigger opportunity. I’d love to be European champion later this year and I think it’s naturally the next step for me after winning the Lonsdale belt outright. I’d also be more than happy to fight Khan in the future. I know he’s looking at the bigger boys but if I can get hold of the European title, I’ll definitely be up for facing him if the chance arises.”

First off, Daws must deal with a fighter who feels his British title shot is three years overdue.
30 year old Ashley Theophane has a well earned reputation as a globetrotter, having boxed in the US four times, Germany four times and also fought in St Lucia during his eight year, 33 fight career (28-4-1, 7 ko’s).
Theophane made his pro debut in June 2003 with a fourth round knockout of Lee Bedell, and went 7-0 before dropping a six round decision to Judex Meema in February 2005. By the end of the year he would raise his record to 11-2, but would lose for a second time, a four round decision to Oscar Mikitas.
Theophane would go unbeaten for the next three years, scoring eleven wins and a draw, and defeating Alan Bosworth via a seventh round TKO in a British light welterweight title eliminator in January 2007.

Theophane made his US debut in February 2008, dropping a decision to New York based Frenchman Ali Oubaali, a former European title challenger and French national champion. It was a solid performance against a more experienced opponent, and Theophane managed to drop the cagey, hard punching Oubaali in the sixth round.
Theophane was back fighting in the States five months later, scoring by far his best victory in his career at that point; an eight round decision over former WBO light welterweight champion DeMarcus ”Cop Chop” Corley.
After a brief, three bout return to Britain, Theophane was again back in the US last February, this time matched against one of Oscar De La Hoya’s Golden Boy Promotions young stars – unbeaten Philadelphian prospect Danny Garcia. In another quality performance, Theophane took the 22 year old to school, out-boxing him for much of the fight and looked extremely unlucky to receive the short end of a split ten-round decision. Although he had lost the fight, Theophane proved once again that he was comfortable boxing at the highest level.
Theophane followed up the disappointment of losing to Garcia with a trip to Germany, defeating German based Afghan Harash Hotaki on a majority decision and picking up something called the IBO international welterweight title. The following month he was back in the United States, scoring an excellent points win over US based Dominican Delvin Rodriguez. Rodriguez, formerly ranked no.3 in the world, had fought for the IBF welterweight title in 2009, and was a former USBA welterweight champion, so had and excellent pedigree. It was a stellar performance from Theophane, and more than made up for the loss to Garcia.
Theophane rounded out 2010 with a six round decision over Willie Thompson last October at the York Hall, Bethnal Green. The York Hall has been a kind of home-from-home for Theophane over the years, and it was his thirteenth appearance at the venerable old arena.
Theophane’s record since September 2005 is an impressive 19-2-1, with one of those losses being the split decision to Garcia that could have gone either way. His power remains negligible, and he has scored just four stoppages during this phase of his career, and has yet to stop an opponent of any consequence. He is currently ranked 11th in the world at welterweight by the IBF, and British boxing magazines Boxing Monthly and Boxing News rank him fourth and eighth in Britain respectively. Boxrec.com rates him as the third best welterweight in Britain, behind only Kell Brook and John McDonnell
It could be argued that Theophane, though undoubtedly stylish and flashy, is in fact more style than substance. He often appears world class, and looked the more complete fighter against Garcia, one of Golden Boy’s brightest young prospects. Some may say that his lack of power will always be a problem at the highest level. It could also be argued that neither Pernell Whitaker nor Willie Pep were concussive punchers, yet they both did okay in their careers.
The bookies have this one down as very close, with Daws a slight 8/11 favorite and Theophane evens. Daws, at a fraction under 5′ 11”, will tower over the 5′ 7” Theophane, and outreach him accordingly. Theophane is used to boxing at 147 lbs, and hasn’t fought at 140 lbs since the DeMarcus Corley fight in 2008. Indeed, he has only fought at light welterweight a handful of times in his career. Will he feel significantly drained at the lighter weight?
This is an extremely tough fight to call, but I think Theophane will take it. Daws has seen his share of wars – the two fights with Morrison and last year’s battles with Cook and Williams – and this could become yet another. With neither man possessing a KO punch, I see this fight going the distance, and Theophane’s better quality and technique just having the edge over Lenny’s guts, determination and work-rate.
Theophane via a close twelve round decision.