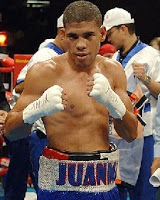 Future Superstar Lopez chases his second world crown
Puerto Rican powerhouse Juan Manuel Lopez challenges Californian Steven Luevano for his WBO world featherweight title in the early hours of Sunday morning. The bout is being held at the hallowed venue that is New York´s Madison Square Garden. Like fellow Puerto Rican Miguel Cotto, Lopez is hugely popular in New York. This is his fourth appearance at the Garden, his second as the headliner, and promoters are assured a sellout.
Lopez headlines a quality card that features WBA featherweight champion Yuriorkis Gamboa defending his title against former Lopez opponent Rogers Mtagwa, and prospective Kelly Pavlik opponent and darling of New York Irish John Duddy.
If both Lopez and Gamboa win their respective fights, a featherweight unification fight between the two this summer will be a given.
At 26 years old, the charismatic Lopez (27-0, 24 ko´s) is fast becoming a superstar on boxing´s world stage.
At 5´7´´ Lopez is tall for a featherweight. From his upright stance, he throws combinations of fast straight punches mixed with scything hooks, in a style that could be described as like a southpaw Erik Morales. Already rated as one of the best pound-for-pound fighters on the planet, his withering punching power ensures that he can end a fight with one shot in any round.
Lopez won the WBO super-bantamweight crown in an upset over highly fancied fellow southpaw Daniel Ponce De Leon of Mexico in 2008. The menacing, heavily tattooed De Leon was making the seventh defense of his crown and entered the ring with a 34-1 record, including 30 KO´s. De Leon had never been floored as an amateur or a pro.
That night, Lopez showed he cared little for reputations, taking the strong, aggressive De Leon head on, and flooring him twice with devastating right hooks to score a sensational first round TKO. “A star is born!” declared HBO´s commentator Jim Lampley.
Lopez followed that victory with two more 1st round knockouts over Mexican Cesar Figueroa and Argentinian Sergio Manuel Medina, both WBO title fights. Cagey Filipino veteran Gerry Penalosa, gave Lopez more of a fight; the 36 year old former WBC super-flyweight champion withdrew after nine one-sided rounds. Likewise, unbeaten Canadian Oliver Lontchi retired after being beaten up by Lopez for nine rounds. It was clear that Lopez had outgrown the division and was weakening his body to make the weight. In his last fight and the fifth and final defense of his super-bantamweight title, Lopez struggled against Tanzanian journeyman Rogers Mtagwa. The African gave Lopez all he could handle for twelve rounds, losing a close decision. The result snapped a three-year, 14 fight knockout streak for Lopez.
On Sunday morning Lopez challenges WBO featherweight champion Steven Lueveno.
During this week´s press conference he insists he is not taking the Californian lightly;
“I will not underestimate Luevano because I was told before my last fight against Mtagwa that fight was going to be easy,” Lopez said. “But I knew it wasn’t easy because I saw the videos of Mtagwa. I know Luevano is a tough guy from watching him, but I know I will be able to handle him.”
The quiet, unassuming Luevano won the WBO featherweight from England’s Nicky Cook on an 11th round knockout in 2007. Luevano starts a clear underdog against Lopez, but should not be underrated. He is a talented boxer and is unlikely to let the Puerto Rican crowd get under his skin in the Garden. He journeyed to London´s O2 Arena to take the crown from the then unbeaten Cook in front of a partisan Essex crowd. He has subsequently defended his title five times, all on points, including a draw against Puerto Rican Mario Santiago. He is undaunted about facing Lopez, and the pro-Lopez crowd that will greet him at Madison Square Garden;
“I’m pretty much used to it because I went out to England and faced the same thing,” said Luevano this week. “I will do the same thing I did in England; don’t even pay attention to the crowd. Just focus on Juanma on the other side of the ring and listening to my coaches. He has all those knockouts and a country behind him, and they feel like he’s better for business and that they can make more money off him, to me, I don’t really think much of him. To me, he’s like a six-round fighter and then he gets tired, so we’re looking to get him into the late rounds. I’m a lot better boxer than he is. I may not have all the knockouts that he has, but I know I’m a lot more skilled fighter.”
Both fightnews.com and boxrec.com rate Luevano as the third best featherweight in the world. Luevano´s only defeat was a decision to dangerous Mexican contender Martin Honorio back in 2005, which is no disgrace.
At 5´7´´ Luevano (37-1-1, 15ko´s) will match Lopez in terms of size and may even have the edge in boxing skills. But Lopez is an exceptional talent, a fighter who would have held his own in with any featherweight in recent history, Pacquiao, Morales and Barerra included. Luevano will hopefully give Lopez a good test. If the Californian gets into his rhythm, he could make things very interesting.
But free from the shackles of making weight, Lopez is likely to be back to his devastating best. He only needs to land one shot and he can turn a fight completely his way. Lopez should win by a knockout, and with his power, it could come in any round from first to last.
Big Fight Odds; Juan Manuel Lopez 1/6 Steve Luevano 4/1 bet365