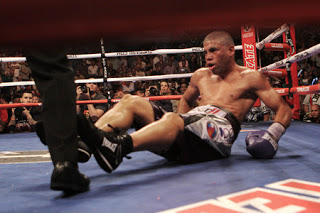 The WBO have threatened to ban former two-weight world champion Juan Manuel Lopez for one year following the Puerto Rican’s verbal assaults of referee Roberto Ramirez in the wake of Lopez’s 10th round TKO loss to Orlando Salido in Puerto Rico on Saturday night.

After Lopez was floored and stopped in the 10th round of his rematch with Salido, he was severely critical of the referee’s actions on live television, and called Ramirez of being a gambler, and alluding to that being the reason why he had stopped the fight.

Lopez has since made a formal apology:

“For my part I apologize to Roberto (Ramirez) for comments I had made after the fight with Salido. Roberto is one of the best referees in the world, he did a great job, and I appreciate that I was protected because I was definitely hurt. Everyone knows how much I trained for this fight, all of the sacrifices that I made, because I wanted to give a big win to Puerto Rico and perhaps the frustration of failing in my country [caused the comments], and again I want to praise Roberto for his work. “

“I also want to give credit to Orlando Salido for his victory and thank him for coming to my country to give me a rematch. It was a great fight, everyone could see that, and I want to thank the people of Puerto Rico for all the support they gave me at the Coliseo Roberto Clemente, and to all those who saw the fight on television. Please know that I still have things to do in boxing and soon we’ll be back to put the name of Puerto Rico up again.”