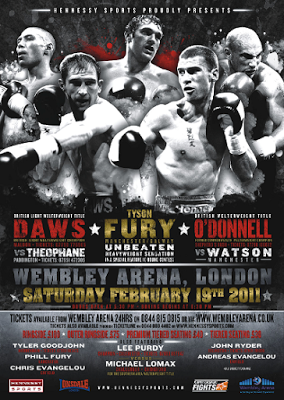 Two former Commonwealth welterweight champions go head-to-head for the vacant British title on Saturday when John O’Donnell takes on Craig Watson in a rematch of their 2009 thriller on Mick Hennessy’s bill at the Wembley Arena.
When the two first met, it was the Shepherds Bush based Irishman O’Donnell who shaded the fight on a twelve round split decision. This time around, Manchester’s Watson is out for revenge. The fight will be screened live on Premier Sports (Sky Channel 433), and will be hosted by the legendary Steve Bunce. Action starts at 8 pm.

25 year old Galway born O’Donnell is currently on a nine bout winning streak, and has rebounded well from his sole defeat, a shock second round TKO loss against Mexican journeyman Christian Solano on the Oscar De La Hoya v Floyd Mayweather Jr undercard at the MGM Grand, Las Vegas in 2007.
In that fight, O’Donnell was floored at the end of the first and finished off in the second by a man who has gone on to lose 20 of his 46 fights, but has undoubted firepower, having scored 16 ko’s in his 22 wins. The defeat, on the biggest boxing stage in the world, had to have been a particular bitter pill to swallow, and O’Donnell, then just 21 years old, needed a year away from boxing to rebuild his shattered confidence.

An outstanding amateur who won two junior ABA titles and a Junior Olympic Gold medal, O’Donnell turned pro in 2004, and was soon being raved about as one of the most outstanding young talents in the British Isles. Managed and promoted by Mick Hennessy, and coached by this writers choice for Trainer of the Year 2010 – Robert McCracken, the man who trained Carl Froch fro his shutout over the fearsome Arthur Abraham, and also coaches the Great Britain’s national amateur team, the young O’Donnell chose to base his professional career in London. Tall for a welterweight at 5′ 11”, O’Donnell loves carry his hands low, drawing his opponents on to his counter shots to both head and body from his southpaw stance.

The disaster in Las Vegas came next, followed by a year’s sabbatical from boxing. In May 2008 O’Donnell returned to the ring and eased himself back into action with a four round decision over journeyman Billy Smith. He then threw himself into his career with considerably more venom, stopping his next four opponents.
In April 2009 O’Donnell was given a shot at Manchester’s Commonwealth welterweight champion Craig Watson. Watson was hot off a career best performance – dominating Matthew Hatton over twelve one-sided rounds, and was expected to have too much for the young Irishman.
However, in a strength sapping give-and-take brawl at the York Hall, Bethnal Green that had the crowd on its feet throughout, O’Donnell just edged Watson via a twelve round split decision.

O’Donnell is ranked second in Britain at welterweight by boxrec.com. British fight magazines Boxing Monthly and Boxing News are equally amenable to the Irishman, rating him third and second respectively. O’Donnell is less respected in Europe at the moment, ranking a lowly 13th, and out of the reckoning for a shot at champ Mathew Hatton’s crown. A second victory over Watson on Saturday will no doubt see him shoot up the EBU rankings.

Earlier this week O’Donnell told the press: “I’m feeling good and training’s gone well. I can’t wait for Saturday now. Last time was a close fight but I intend to make it an easier night this time. I don’t want to give too much away but I know what I’ve got to do. I’ve got to stick to the game plan and it’s just a case of going in there and doing it. I’ve got to get Watson out of the way first. I’ve got to do a job and look good, then we’ll see what doors open after that. But I’d love to face Matthew Hatton. I think it would be a great fight and I’ve been calling for it now for some time.”

Manchester’s 28 year old Craig Watson (19-3, 8 ko’s) will be looking to improve on his split decision loss to O’Donnell in 2009. The 5′ 8” slugger will be buoyed by the news that one of his victims – Matthew Hatton – is to fight Saul Alvarez for the vacant WBC super welterweight title.
Watson who currently holds the Commonwealth title at 154 lbs knows an impressive performance against O’Donnell could thrust him into a potential title fight with Hatton should he win next month.

Watson first came to the public attention when he knocked down teenage Olympic silver medalist Amir Khan in the amateurs. He turned pro in May 2005, and stormed to eleven wins in his first twelve fights, losing only on points to fellow prospect John Fewkes in February 2007.

In only his thirteenth pro fight, Watson pounded Namibian Ali Nuumbembe to defeat in eight rounds to win the Commonwealth welterweight title. Suddenly, the young slugger from Oldham looked one of the hottest 147 pounders in Britain, but his world came crashing down in March 2008 when he was blitzed in three rounds by undefeated Italian hotshot Daniele Petrucci in a European welterweight title fight.

Watson was to prove his true mettle in his next contest when, in what was still only his fifteenth fight, he derailed the progress of 37 fight veteran and future world title challenger Matthew Hatton. He dominated the current European champion, winning by a landslide on all three judges scorecards and out-punching his rival 3-1. It was an outstanding performance by Watson, and remains Hatton’s only defeat in the last five years.

Watson suffered the disappointment of losing his Commonwealth crown by the tightest of margins to John O’Donnell in his next fight, but has rebounded excellently, scoring six wins in just sixteen months, including a two round knockout over the highly rated Algerian Riad Menasria in November 2009, and a second round stoppage over Ugandan Badru Lasambya to lift the Commonwealth light middleweight crown last April.

Watson is ranked third in Britain at light middleweight by Boxing Monthly, and fourth at welterweight by Boxing News. His future would seem to be at welterweight, and when he spoke to the press earlier this week he was focused on Saturday’s British welterweight title fight:
”This should have come a lot sooner, but now I’ve finally got the chance to prove the first fight with O’Donnell was the wrong decision. He says he will shut me up, but it’s all right saying that – we’ll see what happens in the ring.”

When asked if he though the London-based O’Donnell had received a ‘home-town decision’ when the two had originally fought at the York Hall in 2009, Watson said:
”He knows if we’d fought in Manchester that he’d have lost every round, but I don’t think I have to win by knockout to get the result. I see this fight as being a lot like Anthony Crolla’s last week. He won by knockout, but even if he hadn’t, the judges couldn’t have failed to have got the decision. I’ve got to be just as convincing and win every round. I’ve fought in London before and I’ve won there before so I’m not worried about going there again.”

Once again, a British title fight has thrown up and intriguing clash of styles, with the crouching, hooking Watson looking to press the action against the upright, counterpunching O’Donnell.
In their first encounter, their styles virtually canceled themselves out. This time around, both men are punching much harder, with Watson having banged out four of his last five opponents and O’Donnell ending six of his last eight fights inside the distance.
The bookies have O’Donnell a razor-thin 4/5 favorite with Watson at 10/11, giving the man who won their first encounter the slight edge.

Watson has the kind of style that although exciting to watch, doesn’t bode well for a long career. O’Donnell also takes a lot of risks, carrying his guard low, which looks a dangerous gamble against a man punching harder than ever.

In this fight I see Watson going all out for revenge over O’Donnell in what could be an early contender for the British Fight of the Year. O’Donnell will get tagged occasionally by big left hooks from Watson, with the Manchester fighter attempting to drag this encounter into his preferred world of ‘trench-warfare’.
The decisive factor will be Rob McCracken’s tactics. If O’Donnell chooses to ignore them, he could get knocked out – spectacularly. If O’Donnell follows them to the letter, he will soak up Watson’s pressure and come on strong in the second half of the fight, winning either by unanimous decision or on a late round stoppage.

O’Donnell on points or late TKO.