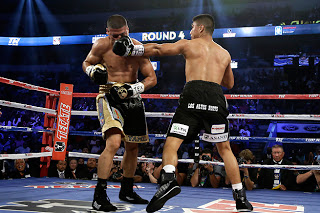 It could be the end of the line for the one-time Golden Boy of Puerto Rican boxing Juan Manuel Lopez.
The supposed heir to such legends as Felix Trinidad, Wilfredo Gomez and Wilfred Benitez looked a shot fighter as he was destroyed in four rounds by undefeated Mikey Garcia at the American Airlines Center in Dallas, Texas on Saturday night . Had Lopez won he would have claimed the WBO lightweight title Garcia had surrendered on the scales the day before.

The once lethal boxer-puncher Lopez never got going and was floored by a Garcia straight right in the second round. He was taking a shellacking when Garcia floored him for a second time with a left hook in round four, forcing referee Raphael Ramos to wave the bout off.

Lopez, himself a former WBO super featherweight and lightweight champion saw his record fall to 33-3 with 30 KOs. His other two defeats came at the hands of Orlando Salido in WBO lightweight title bouts. In both of those fights Lopez took a sustained beating before being TKO´d. After a year lay-off, Lopez returned with a couple of easy confidence building knockouts, but in retrospect, throwing him in to a title fight against such a dangerous opponent as Mikey Garcia – who himself had relieved Salido of the belt via an 8th round TD that he was dominating, may have been a step too far too soon.

Lopez is only 29, and not too long ago was rated as one the best fighters on the planet. Can he really be shot already? Certainly, he appears to have relinquished all punch resistance, and on Saturday also looked to be having issues with balance and basic defence. The future does not look bright.

Meanwhile, Garcia (now 32-0 with 27 KOs) is looking the real deal, and one can foresee potential mega-matchups with the likes of Abner Mares, Chris John, maybe even Nonito Donaire and Guillermo Rigondeaux ahead.