Home Archive Is Paulie Malignaggi Ready To Score The Biggest Win Of His Career? 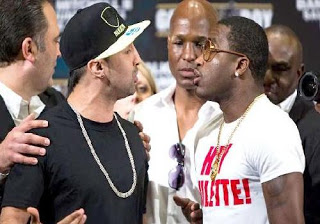 Love him or hate him, you can´t ignore Paulie Malignaggi. The brash, cocky, fast talking Brooklynite has had almost as many comebacks as fellow New Yorker Frank Sinatra.

And like Old Blue Eyes, Malignaggi has certainly done things his way. Maybe he hasn’t been blessed with devastating devastating hitting power, and maybe he gets tagged more than he should, but he has a good chin, the heart of a lion and still remarkably slick boxing skills and hand-speed, especially for a 32 year old.

Those skills have made him a two-weight world champion and carried him to a 32-4 (7 KOs) record in a twelve year career, and this Saturday at the Barclay´s Center in his native Brooklyn he defends his WBA welterweight crown against possibly the most controversial figure in boxing today – Adrien ´´The Problem“ Broner (26-0, 22 KOs), the current WBC lightweight champion.

Malignaggi first grabbed the attention of the boxing public with his brave but losing effort against a peak Miguel Cotto back in 2006. Despite being floored and cut early on, Malignaggi, who with his bizarre hairdo and plucked eyebrows looked more like a hairdresser than a fighter back then, displayed his immense heart by not only lasting the distance against the relentless, big-punching Puerto Rican, but staying competitive throughout, ultimately losing a unanimous decision.

A year later Malignaggi was a world champion after scoring a controversial points win over Lovemore Ndou to take the IBF light welterweight belt. 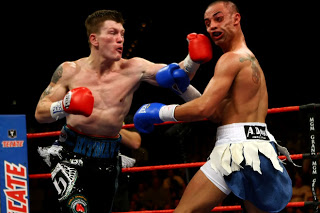 He tasted defeat for a second time in 2008 when he took a brutal beating at the hands of Ricky Hatton and was stopped in 11 rounds. When he lost a decision to Juan Diaz in 2008 it looked like Malignaggi was on the slide. However he avenged the loss to Diaz, and landed a shot at WBA 140 lb champ Amir Khan, but found himself outclassed by the blazing fists of the Brit and was once again stopped in the 11th.

Malignaggi began doing colour commentary for HBO, and proved himself to be an excellent annalist. He also signed to promotional giants Golden Boy, and after a couple of comeback wins at welterweight, landed himself a surprise title shot at Vyacheslev Senchenko´s WBA welterweight title last April. In something of an upset, Malignaggi scored a ninth round TKO over the Ukrainian due to a badly cut eye. Malignaggi successfully defended his new title sixth months later, albeit controversially, winning a split decision over young Mexican star Pablo Cesar Cano. 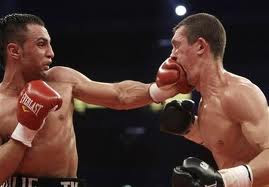 Now Malignaggi takes on an opponent who appears to have the skill and power to not just take his title from him but possibly hand him another stoppage defeat – Adrien Broner.

If one could take a degree called How To Sell A Fight The Floyd Mayweather Way, Broner would have passed with honours. Here is a fighter who has taken trash talking and crass behaviour to a whole new level, as anyone who has seen the on-line footage of his recent strip club antics can testify. The shame of it is, unlike Mayweather, who needs to ´´gangsta-up“ his out of the ring persona in order to generate interest in his fights, which in terms of action and drama, rank low on both, Broner by comparison – despite his supreme boxing skills – loves a punch-up, and always chases the KO – qualities that make him great to watch. 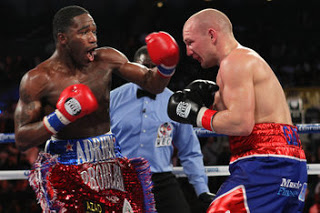 Unlike Mayweather, who appears positively allergic to taking any kind of punishment in the ring, Broner has no qualms about taking a shot to land his own, as witnessed in his recent title defence against Welshman Gavin Rees, a fifth round retirement win that saw him caught with an alarmingly high number of punches. Maybe Broner will think twice about fighting like that if the opponent is Lucas Matthysse, but he is unlikely to be overly concerned about what Paulie Malignaggi might be throwing in his direction.

Nevertheless it´s still a big ask for the 23 year old from Cincinnati to jump two weight classes from a division he has only just entered (Broner was defending his WBO super featherweight title as recently as July 2012), and against as seasoned an opponent as Malignaggi, but such is the talent of Broner, he will come in to the ring as the bookies favourite on Saturday night.

In a recent press conference between the two, Malgnaggi brought up a conversation he and Broner had had in the latter´s dressing room prior to his 2011 fight against Daniel Ponce De Leon, to date Broner´s toughest fight and one many believe he lost. Supposedly Broner stated that he feared going the distance in a long fight and wondered if he had the stamina to do so. ´´How do you do it?“ he asked Malignaggi. Broner barely got by Ponce De Leon and has not been the distance since.

If Malignaggi can keep away from Broner in the early rounds and use his boxing skills, this could become a very interesting fight. Against the relentless buzz-saw attack of Hatton, Malignaggi just could not keep him off, and against Khan he was up against someone who did everything that he does, just faster, harder and better.

Broner is neither a Hatton nor a Khan; he is basically a defensive counter-puncher that fights aggressively, if that makes sense. He can be explosive, as in his career-best performance – his first round blitzkrieg of Jason Litzau in 2011, turning defence into attack in seconds. But he was a much smaller man v Litzau, and the bulkier Broner has got in recent months, the less mobile he has become.

If Malignaggi is 100% up for this fight and if he doesn’t care about upsetting his paymasters (Broner is one of Golden Boy´s biggest stars) and if the fight is on the up-and-up, he can win a decision. If he goes into the ring just grateful for the pay-day, a la the majority of Floyd Mayweather´s recent opponents, Broner will bash out a points win or even force a late stoppage.

If I had to pick a winner, I´d pick the Magic Man to score a close but unanimous decision.