Home Archive Is Malignaggi all wrong for Khan? 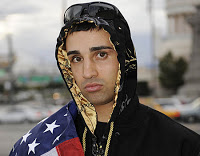 New York stylist Paulie Malignaggi has emerged as the likely opponent for WBA junior-welterweight champion Amir Khan´s US debut. The bout has been penciled in for May 15th at Madison Square Garden.

There has of yet been no official confirmation of the fight, but at the time of writing Malignaggi´s name is the only one in the frame. Negotiations are currently ongoing between Khan´s new promoters Golden Boy, and Malignaggi´s manager/promoter Lou DiBella.

23 year old Khan (22-1, 16 ko´s) was originally slated to fight WBA no.1 contender Marcos Rene Maidana, but the vicious punching Argentinian has been paid ´stand aside money` so that Khan can make a lucrative first title defense before risking his crown against what is considered a high-risk, low-reward opponent.
The first name linked with Khan was reigning WBA and WBO lightweight champion Mexican Juan Manuel Marquez. Marquez´ management teamed pulled out of negotiations for the fight, claiming that Golden Boy showed Marquez a lack of respect, casting him in the role of a “stepping stone” in Khan´s career.
WBO interim lightweight champion Michael Katsidis and two weight world champion Nate Campbell were considered as replacement opponents, but the final choice seems to be former IBF junior-welterweight champion Paulie Malignaggi of Brooklyn, New York.

Malignaggi is known to UK fight fans primarily for his losing effort against Ricky Hatton in December 2008. Fight fans in general know Malignaggi to be one of the most gifted, yet frustrating boxers in the game. Looking more like a hairdresser than a boxer, with with a talent for delivering quotes as fast as his hands deliver combination´s, Malignaggi emerged as a refreshing change, or a fistic abomination, depending on ones point of view, in the mid-naughties. Malignaggi was original considered nothing more than a “cocky loudmouth” by New York critics, a fighter with plenty of flash and little substance.
All that changed the night he gave undefeated Puerto Rican Miguel Angel Cotto a hell of a fight in a 2006 challenge for Cotto´s WBO light-welterweight title, despite sustaining a bad cut in the first round, and knockdown in the second. Suddenly his critics respected him. The kid could really fight, and he had proved that he had “cojones”.
The following year Malignaggi won the IBF version of the title with a commanding points win over South African iron-man Lovemore N´dou. He defended the IBF crown twice, before giving it up to fight Ricky Hatton in 2008.

Throughout his career, 29 year old Malignaggi has been crippled with chronic injuries to his right hand, injuries that have limited his knockout percentage as a pro. His record stands at 27-3, with just five knockouts. One has to go way back to 2004 for Malignaggi´s last inside-the-distance win.
Amir Khan is a supremely talented fighter, but the phrase “cement chinned” is unlikely to ever be attributed to him. If Golden Boy and Freddie Roach were looking for the complete opposite of big punching Maidana, who has flattened 26 out of 27 victims against just one loss, they have found it in Malignaggi.

The best example of Malignaggi´s right hand letting him down in a fight was the night he fought Ricky Hatton. It was clear from very early in the bout that Malignaggi´s right hand had gone. In the ensuing eleven rounds of combat, he rarely threw it with any force, and yet Malignaggi chose to stand in front of Hatton and trade. The Brooklynite had been calling Hatton out for years, so maybe he felt that he owed it to the fans to make a fight of it, but his tactics proved suicidal. Malignaggi showed in his twelve round war with Miguel Cotto that he is deceptively tough, and can take a punch. He proved it again against Hatton. Malignaggi sustained a terrible battering before the referee stopped the slaughter in the 11th. The result made Hatton look sensational, the best he had looked since the night he ripped the world crown from Kosta Tzyu in 2005.

Malignaggi proved in his last two fights, a loss and a win against former WBC lightweight champion Juan Diaz, that he still has plenty left in the tank. He will also have plenty of support if the fight does indeed take place in Madison Square Garden. Khan will find Malignaggi to be by far the fastest fighter he has yet fought. If Malignaggi´s right hand is okay, he has the speed to sting Khan with counters. Malignaggi can be caught, as was saw against Cotto and Hatton, and in his two fights with Juan Diaz, but he rides a shot well. He is unlikely to “go” from one good punch. If Malignaggi has success early in the contest, it could become a very difficult night for the lad from Bolton, who could find himself chasing thin air as Malignaggi piles up points. If the limited Andriy Kotelnik could give Khan problems last year, a peak form Malignaggi will give him fits.

The truth is there are no soft touches in the light-welterweight division. Marquez and Campbell would have been better opponents for Khan, because he does well against conventional boxers.
With Paulie “Magic Man” Malignaggi he can expect the unconventional.