Home Archive Is Gennady Golovkin vs Matthew Macklin A Mismatch Or Can ´Mac The... 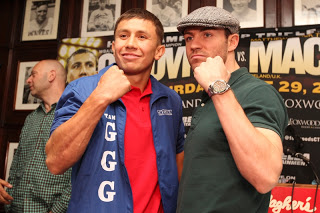 Birmingham´s own Celtic Warrior goes into the abyss this Saturday when Matthew Macklin takes on a contender for the hardest pound-for-pound puncher on the planet – Gennady Golovkin.
The fight at the Foxwoods Resort, Connecticut, USA is for Golovkin´s WBA middleweight title and it will be his seventh defence since he won the interim version of the belt with a first round KO of Milton Nunez in 2010.

It will be the third crack at a world title for 31 year old Macklin (29-4, 20 KOs); he looked desperately unlucky not to get the nod against Felix Sturm in Germany back in 2011, losing a split decsion, and he floored modern great Sergio Martinez before his corner pulled him out after eleven tremendous rounds in 2012. 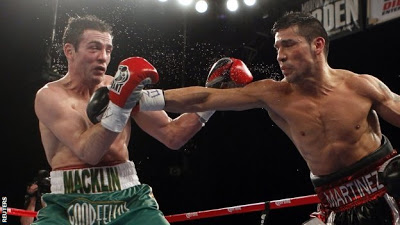 Any doubts that Macklin may have slipped were dispelled when he blitzed Joachim Alcine in one round last September. Canadian based Hatian Alcine was hot off an upset win over Canada´s big hitting middleweight star David Lemiux, and was expected to be a real test for Macklin.

31 year old Golovkin (26-0, 23 KOs) has been blazing a trail through the middleweight divsion´s B-list and drawing rave reviews in the process. The Kazakhstan born, German based brawler is on a 13 bout KO streak that includes wins over Gabriel Rosado and Nobuhiro Ishida. The other title holders in the division are IBF champ Daniel Geale, WBC king Martinez (who may be stripped of his crown and given an Emeritus tag any-time soon by WBC boss of bosses Jose Sulaiman due to his injury enforced lay-off) and WBO title holder Peter “Kid Chocolate” Quillin. Many would claim that on current form, Golovkin is the best of the bunch.

Golovkin was an outstanding amateur, and won gold in the 2003 World Championships and a silver in the 2004 Athens Olympics on the way to compiling a 345-5 record. As an amateur he defeated current top pros Andre Dirrell, Andy Lee, Matt Korobov and Lucian Bute. Golovkin has never been knocked down or stopped as an amateur or professional.

He turned pro in 2006 at the comparatively late age of 24, but made solid progress and lifted the interim WBA middleweight belt in 2010 with a one round knockout of Milton Nunez. 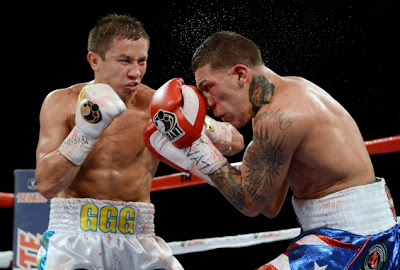 Since then Golovkin has made seven defences of his title, all inside the distance, and has taken out quality fighters like Kassim Ouma (TKO 10), Grzegorz Proska (TKO 5), Gabriel Rosada (TKO 7) and Nobuhiro Ishida (KO 3).

Many fans and critics have raved about Golovkin as if he is the second coming of Carlos Monzon. He’s not. Although highly effective, he is, to put it bluntly, a one-dimensional plodder with with heavy hands and a good chin – qualities that can get one far in boxing – Antonio Margarito being a prime example.

In this writer´s opinion, at this stage of his career Golovkin is inferior to all of the recent outstanding middleweights: Bernard Hopkins, Jermain Taylor, Kelly Pavlik, Arthur Abraham and Sergio Martinez. It´s also possible that a peak Felix Sturm would have beaten him. That is why a win on Saturday night for Matthew Macklin is not out of the question. Macklin is slightly the bigger man naturally, has sound boxing skills and good power. He also takes a shot.

If Macklin can keep a high work rate, keep his chin out of the way and boxes, he can pull off an upset. The problem is, Macklin loves a war, and it will take all of his self discipline to stick to his game plan. If he elects to trade with Golovkin, he will find himself the Kazakh´s latest KO victim.