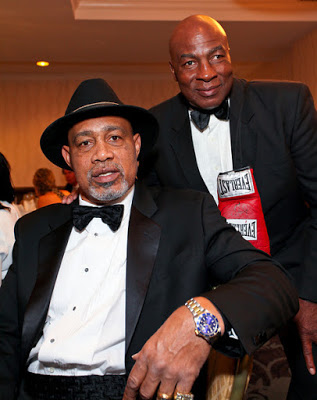 I was resting in the hotel room when my girlfriend and her daughter came in. My girlfriend looks at me, “Do you know who Ernie Shavers is?”

Well yes I do know who Ernie Shavers is. She tells me that he is signing autographs in a memorabilia shop in the Miracle Mile Mall of the Planet Hollywood casino, hotel and retail complex. “Do you think he’s still there?” “Yes, do you want to see him?”

And I did want to see him. We’re staying at Hooters which is behind the Trop; just off strip. We go down and get in the car and we go via Harmon and find a parkade in the back of the Planet complex. We find a spot and enter through the back, into the Miracle Mile part, the shops.
I’m feeling excited but I’m walking with a cane, walking with difficulty. I’m still recuperating from spinal surgery that I had last spring. Here it is late August.

We come up on the shop pretty quickly and there is Shavers sitting at a folding table sideways to the front entrance. He’s got a cell phone pressed against his ear. He glances at me and he is aware that I’m there to bother him. I’m feeling bashful but I don’t care, I’m there to get a handshake and that’s it. He talks briefly and he hangs up. I walk over, “Sir, can I shake your hand?” He doesn’t look too friendly but he reaches out with his large right hand.

I’m telling him about all the other boxing notables that I shook hands with but he is underwhelmed and I falter and then I just leave him alone. I wasn’t offended really. He’s there to make a buck and I wasn’t buying anything. Maybe he had personal problems.
The owner of the store shows me a picture of Tyson. He says, “Mike’s doing well now. He’s married and happy, he’s settled down.” I tell him that’s nice, I tell him that I saw Mike around town, at the gyms and what not when I lived in Vegas.

The owner is telling me that Ken Norton would be arriving soon and as he’s telling me that a big guy, really big, walks in from the back and its Norton! He’s pushing a walker and I feel better because I got to use a walker sometimes. Norton looked good, muscular and fit save for he doesn’t walk well. He looks like he lifts weights. 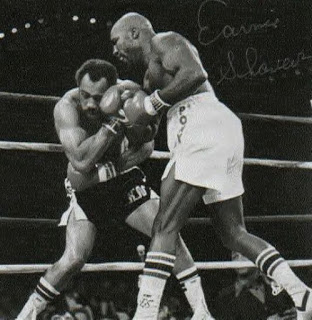 He’s smiling and he looks relaxed. I tell him that I don’t want an autograph or anything; I just want to shake his hand. He reaches out and my hand disappears. I tell him how good he looks. He puts his hand out, “Oh, stop.” I tell him he beat Ali three times. And I really believe that. Norton had Ali’s number like no other fighter. He points to the picture of him chasing Ali on a football field and they both got gloves on. He points, “Street shoes…” He’s telling me,” It’s the 70’s.” The shoes have those built up heels. Norton has a speech impediment because of his car accident. He’s hard to understand. I make a concerted effort and he is patient and not self conscious. He’s disabled but he is Ken Norton first. Some small talk; he’s telling me that it’s the little guys that carry boxing now; 130 to 147, and he’s right of course. I figure it’s getting to be time to leave. I don’t want to impose on this guy. I thank him profusely and thank Shavers and we turn and walk into the atrium. I’m telling Kelli, my girlfriend, “I can’t believe it! Ken Norton!” He was so nice to me.

We get about 20 feet out of the store and I started crying. I don’t know why. I can’t say why. My life came into focus; the passage of time. It got real. But I pulled myself together and we spent the rest of the day out at Lake Mead.