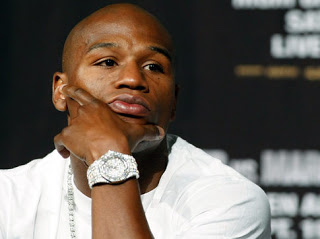 Floyd Mayweather Jr turns 34 next month. In a fifteen year career, ”Pretty Boy” has won world titles in five weight divisions from junior lightweight to light middleweight and compiled a record of 41-0 with 25 ko’s. He has won a staggering eighteen consecutive world title fights.

His record reads like a who’s who of boxing from the 90’s and the naughties and boasts such standout victims as Angel Manfredy, Diego Corrales, Jose Luis Castillo, Arturo Gatti, Zab Judah, Oscar De La Hoya, Ricky Hatton, Juan Manuel Marquez and Shane Mosley among many others.

To all intents and purposes, Mayweather appears to be winding down his illustrious career, having fought just twice in the last three years. His current legal issues may keep Mayweather out of the ring for 2011. For a fighter who relies on his speed and reflexes as much as Floyd does, time is no longer on his side. For arguments sake, if Mayweather where to decide that he wanted to preserve his legacy and health and turn his back on the sport that has made rich, famous AND infamous, how will he be judged in the decades to come?

Infamy loses its power very quickly when we assess great fighters of the past. Heavyweight legends like Jack Johnson, Muhammad Ali and Mike Tyson are revered for their accomplishments in the ring although during their careers all three were better known to the public at large for their exploits outside of the squared circle.
Floyd Mayweather will eventually be judged purely as a fighter. But how will he match up against the greats of the past in the divisions he conquered, and in what weight class will he take his place as an all time great?

Mayweather grabbed his first world title back in October 1998 when he forced Genaro Hernandez to retire after eight one-sided rounds. Even at that time, Floyd was a big noise within boxing circles. A standout amateur who’d won 84 of 90 bouts and taken a bronze medal in the Atlanta Olympics, the young Mayweather was a slick stylist who this writer considered to be more Howard Davis than Ray Leonard at the time.

That opinion was revised following Mayweather’s very first title defence, when the 21 year old blitzed the fearsome Angel Manfredy in just two rounds.
Manfredy was hot off a stoppage win over a young Arturo Gatti, and with his solid boxing skills and strong punch allied to a shaven headed, heavily tattooed appearance, looked to be a dangerous opponent for Mayweather. However, late in the second round, Floyd cut loose with a barrage of unanswered punches that was pure Sugar Ray Leonard at his very best, forcing the referee to jump in.

Mayweather would make a total of nine defenses of his first world title, the most famous being his sensational five-knockdown, ten round destruction of the towering, undefeated power-puncher Diego Corrales in 2001.

In 2002 Mayweather jumped up to lightweight and scored back to back wins over the outstanding Mexican Jose Luis Castillo to win and defend the WBC 135 lb title. Mayweather would make just three defenses of his new title before jumping to 140 lbs, and claiming the WBC light welterweight title with a 6th round retirement over Arturo Gatti in 2005, a title Mayweather never defended.

In April 2006 Mayweather weighed 146 lbs as he scored his most impressive victory to date in this writers opinion – a pulsating twelve round decision over a peak form Zab Judah. Later that year Mayweather became the first man to stop tough Argentinian Carlos Baldomir to add the WBC welterweight title to his collection.

In 2007, Mayweather outpointed the legendary Oscar De La Hoya in what remains the richest fight in boxing history to take the WBC light middleweight crown, becoming one of only four men to have won major world titles in five or more weight classes, Leonard, De La Hoya and Pacquiao being the others.

Mayweather has returned to welterweight for his last three fights; scoring a10th round knockout over Ricky Hatton in a 2007 WBC title defence, and outpointing Juan Manuel Marquez and Shane Mosley in 2009 and 2010 respectively.

As Mayweather has climbed the divisions, he has become more and more defensive minded, as a result, less the aggressive, attacking fighter of his youth. Since abandoning the junior lightweights, Mayweather has scored just five stoppage wins in fourteen fights. Prior to that his knockout record stood at an impressive 20 ko’s from 27 fights.

Without doubt, Mayweather was at his most effective at junior lightweight, and will be rated as one of that division’s best ever, alongside the likes of Alexis Arguello and Azumah Nelson. Had he spent more time at lightweight, I feel he would have dominated that division also, although Roberto Duran and Benny Leonard are unlikely to be shifted from the top of the all-time 135 lb tree any time soon.

As I mentioned earlier, I thought Mayweather never looked better than in his win over Judah, but the win is somewhat deceptive in that if anything, Judah was a smaller welterweight than the 5′ 8” Mayweather. Although he has continued to win at welterweight, Mayweather’s choice of opposition at 147 lbs could be said to be cagey.

Such is his skill and talent, a clearly bulked up Mayweather is still one of the best welterweight’s in the world, although he would be hard pressed to make the all time top-ten of a division that has played host to some of the greatest fighters ever to lace on the gloves and boasts names like the two ‘Sugar Rays’ – Robinson and Leonard, Thommy Hearns, Wilfredo Benitez, Henry Armstrong, Jose Napoles, Barney Ross, Ted ‘Kid’ Lewis and Mickey Walker etc, not to mention recent stars like De La Hoya, Mosley, Whitaker and Trinidad.

No matter what Floyd Mayweather chooses to do with his boxing career and his life in general, history will judge him as a truly great fighter, one who in particular ruled the junior lightweights from 1998 to 2002, and may have been that division’s greatest ever.