Home Archive The Holyfields set to reveal all! 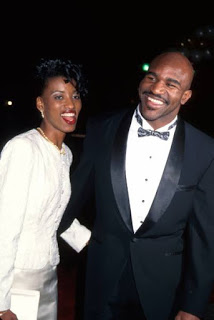 The former heavyweight champion’s confessions may be as embarrassing as Tiger Woods’!
Evander Holyfield, the 47-year-old very former world heavyweight champion who won’t lie down, was scheduled to fight the 41-year-old spring chicken Frans Botha, a similarly reluctant has-been, somewhere in Africa at the weekend for a title of stunning inconsequence. But nobody could give a damn, so they cancelled.
Cruel? Not as cruel as watching two aging pugilists rushing towards middle age, joined in a mutual peace pact disguised as a boxing match.
Evander, though, has another fight on his hands and this one looks like it will get air time. Holyfield and his third wife, Candi, want to tell the world, on television, about their turbulent private life, how he hit her recently and generally has not been the God-fearing, straight-up guy he once wanted the world to believe was the “Real Deal”. Does some of this sound familiar?

So, after the tabloids got hold of stories about ructions between them, the couple issued a statement at the weekend, which is the accepted practice when private embarrassment becomes public property, especially when the palatable alternative to an expensive divorce is a lucrative appearance on a syndicated TV programme. read more?