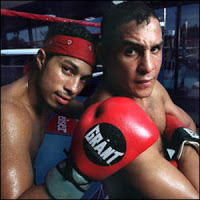 NEW YORK (AP) — It’s been nearly three decades since Hector Camacho won his first world title, and almost two decades since he won his last.
For those 10 years in between, he was among the most exciting and controversial figures in boxing. He was a brawler who reinvented himself as a defensive fighter, whose rivalry with Julio Cesar Chavez made just as many headlines as his outsized personality.
He’s 47 years old now, reduced to fighting in places like Coconut Creek and Biloxi instead of Las Vegas and New York. The glitzy casinos and glamour of Madison Square Garden have given way to hotel ballrooms and small convention centers, as the man nicknamed “Macho” keeps trying to stave off obscurity the best he can.

“This is something I’ve done all my life, you know?” Camacho said by phone after a workout for his next fight, against Allan Vester on March 26 in Kjellerup, Denmark. “A couple years back, when I was doing it, I was still enjoying it. The competition, to see myself perform. I know I’m at the age that some people can’t do this no more.”

Camacho’s life and career have taken more turns than a pulp novel, from the gritty streets of Spanish Harlem to the bright lights of the Golden Gloves, from walking between the bars of a jail cell to stepping between the ropes of the ring.read more